Time To Short the Automakers?

ACCEPT THE FACT YOU COULD LOSE YOUR ENTIRE INVESTMENT.

If this makes sense to you, buy in-the-money puts.

Motor vehicle sales were an 18.1 million annual rate in December 2015.  They fell to a 16.6 million annual pace in April, rebounding slightly to 17.4 million in May.  But big sales incentives drove the latest sales increase.  From the Detroit News:

Helping increase Fiat Chrysler’s April sales were some of the highest incentives in the industry of nearly $4,000 on average per vehicle sold, up 25.1 percent from a year ago, according to TrueCar.

It’s possible that auto sales have topped for this cycle.  Consider the following chart from Econoday: 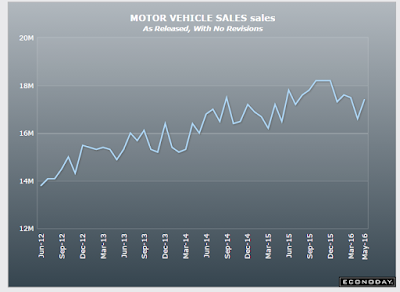 With the exception of the spike in 4Q15, this data series has moved sideways since September 2014.

The following chart from Doug Short contains a 9-month moving average that shows a decline in the trend since the end of last year: 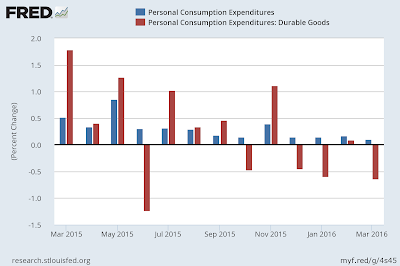 Above is a 1-year chart showing the monthly percentage change in personal consumption expenditures (("PCEs"; blue bars) and PCEs of durable goods (red bars).  Monthly PCEs have slowed: the last 4 readings are barely positive.  Durable goods purchases contracted in 4 of the last 5 months.  Clearly, consumers are slowing their purchases.  And this is occurring within a broader slowdown in economic growth and slightly weaker employment gains.


Let’s now turn to the daily Ford and GM charts: 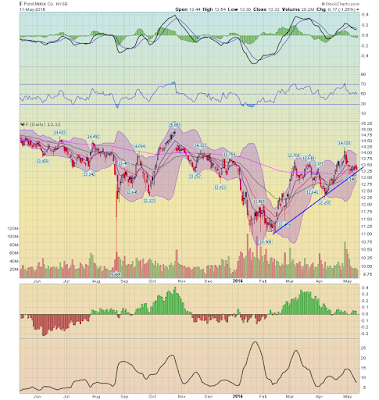 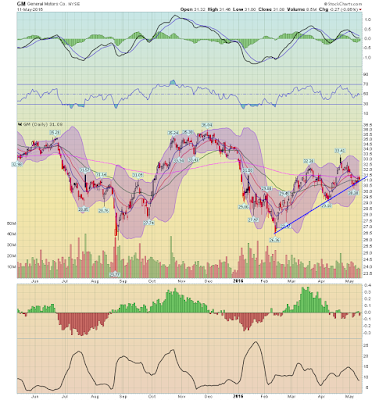 Both have similar technical characteristics.  For the last year, each has encountered strong technical resistance at the 200-day EMA.  Both have declining momentum.  Most importantly, both are right at short-term technical support.

Toyota is in worse technical shape: 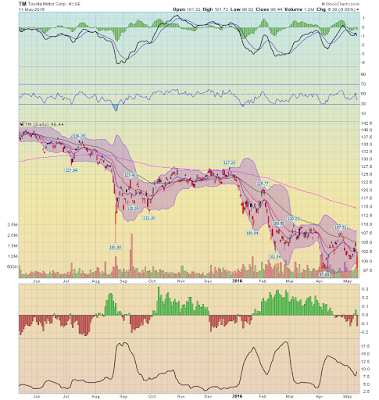 Momentum is negative.  Prices are near a 52-week low and they printed a very strong negative bar yesterday.  And there is added fundamental pressure on Toyota’s shares:

Toyota Motor is bracing for its first profit decline in five years as the stronger yen and growing recall costs threaten to crimp its growth prospects.

The world’s largest carmaker had enjoyed a steady period of record profits on the back of the yen’s fall since Shinzo Abe became prime minister in 2012.

But that trend has reversed recently as the company was hit by the rising yen, costs to recall and replace Takata-made airbags and disruptions to supply chains caused by earthquakes in southern Japan last month.

The pieces have lined up nicely for shorting.  But please read the caveat at the top of this article.