/this week we have two follow-up reports on the labor market: the Labor Market Conditions Index, and the JOLTS report.

Let's start with the LMCI.  As I have previously noted, the LMCI shows promise as a long leading indicator, as 40 years worth of data shows it turning negative usually a year or more before the onset of a recession: 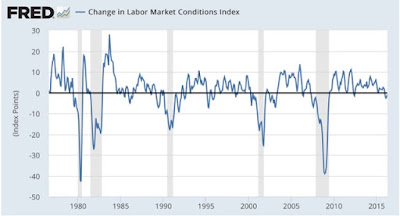 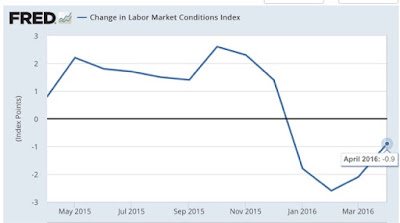 This is another small addition to the evidence that 2017 might be a poor year.  It also suggests that monthly job gains, that have already decelerated from a 225,000 rate, will continue to do so.  In other words, export more reports of 1xx,000 to come.  But at the same time it is nowhere near as negative as it has been in the past at the onset of recessions.


Now let's turn to the JOLTS report.  While it is an extremely useful dissection of the labor market,  it has only existed for 15 years, and thus includes only one full expansion.


For most of 2015 I was unimpressed with the report.  True, job openings (blue in the graph below) were soaring to new heights, but actual hires (red) stalled -- the same pattern as in 2005-06. late in the last cycle.  Three months ago openings decreased significantly - something which happened just before the 2007 recession started. Fortunately, that only lasted one month.  For the last 2 months improving openings and hires have been the case.  Here is the complete series: 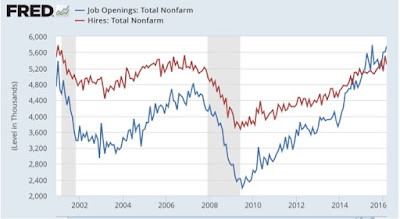 The pattern from the last expansion was: first, hires peak.  Then, openings peak. 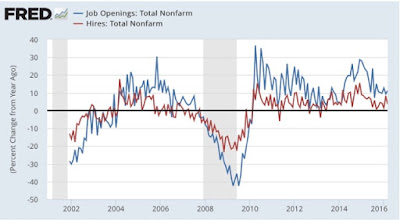 Openings had been rising faster than hires, which are have been barely positive.  Until two months ago, when hires soared to a new all-time high, as shown in the first graph above at far right.  Since then, the upward trend in hires has remained.

Some more good news was contained in the quits rate, which also continued in an uptrend, if not quite at their record of three months ago (red in the graph below): 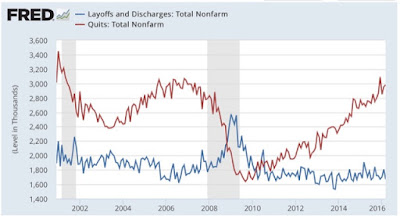 This means that workers were confident enough in their prospects to voluntarily leave their jo bs.  Note that layoffs (blue) remained low.  Needless to say, the increase in voluntary quits is a significant positive.

Further, two months ago  Dean Baker made a point that there is "pent up damend" for quits, and therefore they should continue to all time record highs. Here's a link to a graph of the U6 underemployment rate (inverted) vs. Quits: 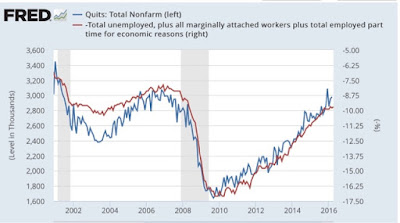 For every level of underemployment over the last 3 years or so, there have been more Quits than occurred during the last cycle -- supporting the  hypothesis of "pent up demand."

Taken together,  the LMCI continues to suggest a maturing but not expiring expansion, and this month's positive JOLTS report suggests that job growth has a ways to go.
Posted by New Deal democrat at 8:00:00 AM