I came across the below graph showing that relationship of average household net worth with average debt vs. the personal savings rate from the NY Fed last week (h/t The Conversable Economist): 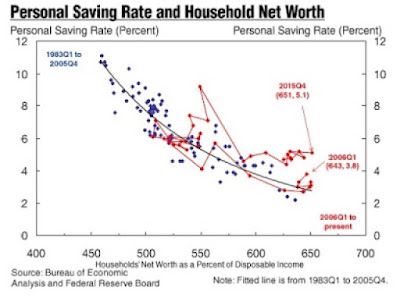 The important point was that the relationship has changed since the Great Recession.  Even though there has been a big increase in average household net worth thanks in particular to the rebound in house prices, the personal savings rate remains elevated compared with its prior history.

This is evidence of something President Obama said during a recent interview, namely, that "Some people are still recovering from the trauma of what happened in 2007-2008,”

That traumatic fundamental change in behavior, a new parsimony, is also apparent in the ratios of  household debt to disposable personal income: 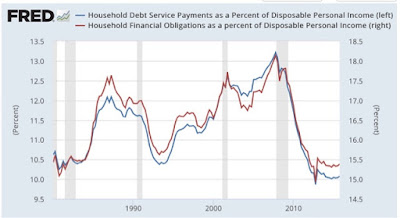 The Great Recession caused households to deleverage away a 30 year rise in obligations in just 5 years, and there is no sign of debt levels increasing even now.

A similarly dramatic reversal appears when we measure household (and business) debt against GDP: 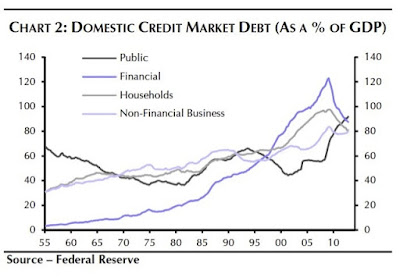 For those of you not old enough to remember, in the 1960s and 70s, as both inflation and interest  rates almost relentlessly increased, the mantra was to take out debt now, at lower interest rates, and pay it back with cheaper dollars, i.e., pay back today's debt with tomorrow's inflated dollars.  In the 1980s and 90s, ever more debt could be financed at the same monthly payments, as interest rates on the payments decreased.

Despite even lower interest rates since 2008, however, households have actually been reducing debt.  This is a new behavior, and I believe it is fair to say that it has been induced by trauma.  Further, just as the generation scarred by the market crash of 1929 and the Great Depression remained savers for the rest of their lives, I expect the generation that has learned this behavior to remain parsimonious for a long time to come.  If anything, debt levels compared with GDP will probably continue to decrease until the post-Millennial generation that does not remember the Great Recession becomes the dominant cohort  several decades from now.
Posted by New Deal democrat at 9:00:00 AM