Memo to Hot Air and Powerline: The US Textile Industry Was Dying Long Before the California Wage Hike

The Hot Air and Powerline blogs have latched onto an LA Times story that notes clothing manufacturers are leaving the area due to the increase in the minimum wage.  Both argue this fact is demonstrable proof that a minimum wage increase is bad.

What this really shows is the complete ignorance of Steve Hayward and Jazz Shaw.  First, a very brief history of the US Textile industry: it started to die a slow and painful death about 50 years ago when Taiwan and other Asian countries started their respective "export our way to growth" programs.  Starting in the 1960s, Taiwan opened up its borders to capital investment.  They requested only two concessions from their investors: that Taiwanese be trained in the new industries and that the invested capital remain in the country.  Thanks to their then lower standard of living, they were easily able to offer cheaper goods which were then exported to the U.S..  To the uninitiated (like Mr. Shaw and Hayward) this is called "comparative advantage), and it's a very basic concept in international economics -- yet another economic subject area both are completely ignorant of.

The only reason there is any textile industry left in the US is due to some level of protectionism and political favoritism.  Want proof?  Here's a chart from the FRED system showing textile employment at the national level: 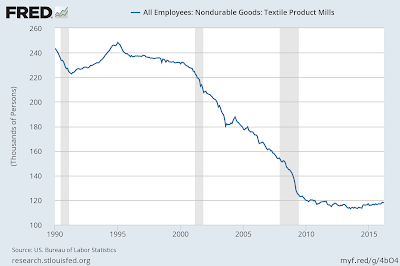 Total textile employment dropped by 50% during Bush IIs tenure (gee -- I wonder if Mr. Shaw or Hayward ever wrote about that?).

And here are two charts from the BLS showing textile employment for Los Angeles:

The US textile industry has been on its last legs for the last 20+ years.  The charts above show that Bush II was far more responsible for its demise than California.  And, most importantly, this industry has been dying a slow and painful death for the better part of 50 years.