In case you haven't already seen this elsewhere, the below report comes from the San Francisco Fed:

Here is the average of 4 measures of wage growth for the last 10 years, showing that while there has been improvement off the bottom a few years ago, it is still pretty patheric: 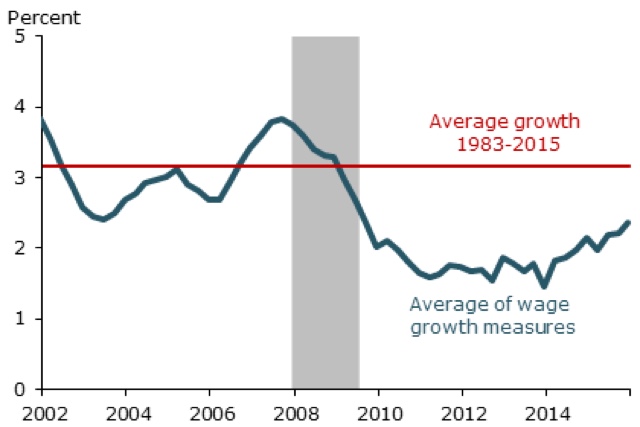 While elevated flows out of full-time employment to not being in the labor force normally contribute positively to median wage growth, this contribution is being attenuated by the retirement of the baby boom. As baby boomers have begun to retire, the fraction of exits occurring from above the median wage has gotten larger, reflecting the relatively high earnings of older workers. The exits from full-time employment of older, higher-paid retirees have also pushed down wage growth. Furthermore, with so many of this generation still to retire, the so-called Silver Tsunami will be a drag on aggregate wage growth for some time.

Overall, our results suggest that changes in the composition of employment have had a significant impact on wage dynamics over the past seven years.... As the labor market has recovered, ... [c]ompositional changes are now a drag on aggregate wage growth. Decomposing this drag, we show [that] the size of the Great Recession and the addition of the aging of the baby boom mean this time is different.

Here is their graph showing the regular cyclical effects of wage growth, and the depression in growth caused by the "silver tsunami" of retirments: 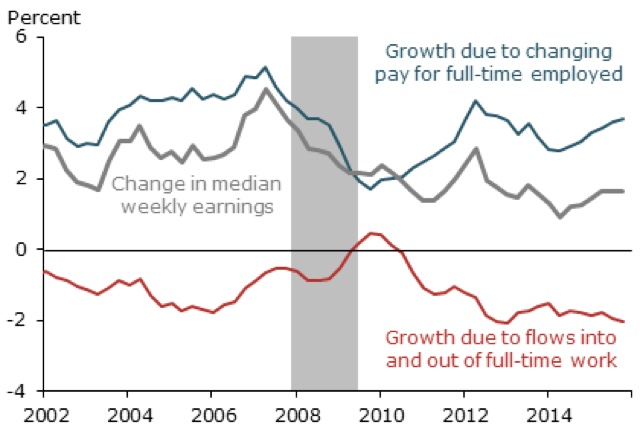 Of course, the replacement of retiring workers by younger workers is always present.  To simplify, imaging that each year's demographic cohort were exactly the same, and that everybody worked for 40 years.  Then each year 2.5% of the workforce would retire, and 2.5% younger people would enter. But because the yearly Boomer cohorts are larger, an outsized share of the workforce is retiring each year, and an equally large demographic of young MIllennials (and now even post-Millennials) is entering.

While it obvioiusly isn't the cause for all of the poor wage growth -- the depth of the slack in the labor force, and the dominant employer bargaining power are very potent explanations -- nevertheless  there is clearly some unusual downward bias to wage growth due to supersized demographic turnover.