Oil is Still in a Short-Term Uptrend 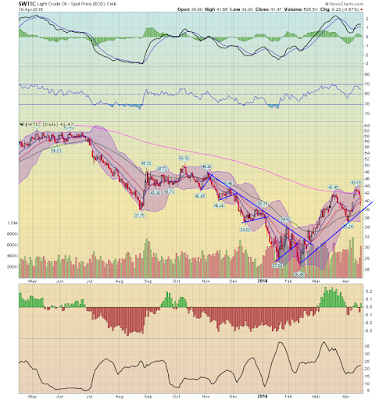 Leaving the EU Would Cost the UK 6% of GDP (FT)

The idea of Britain negotiating a deal to have full access to the European single market while not being a member of the EU is “complete fantasy”, George Osborne has said, as he stepped up the attack on the “economically illiterate” Leave camp.

On Monday the Treasury published its long-awaited estimates of what the long-term consequences of leaving the EU would be for the UK economy. Launching the Treasury document alongside other cabinet ministers in Bristol, the chancellor claimed the UK economy would be 6 per cent smaller if the country was to quit the bloc, leaving Britain with diminished influence and less trade.

A British exit would leave a £36bn hole in the public finances equivalent to 8p on the basic rate of income tax, Mr Osborne said.

Take a look at the overall growth rates, and you can see kind of a similar situation, where growth was relatively OK and then fell apart in the Great Recession. And then we've had these really great-looking growth numbers for auto sales that have everybody so excited. For example, in 2012, we grew as fast as 13%. Well, that was related to the recovery, not to some great new demand for automobiles, and since then we've fallen back a little bit and growth in 2015 was about 5.5% or so.

Well, now, looking ahead, we don't see any particular reason for automobiles to grow any faster than overall population growth and maybe a little business growth. So, we expect 1% to 3% growth out of the auto industry in the years ahead, not the same big 13% we got in 2012. Nothing to worry about, but again, a slower growth rate than people have been anticipating. 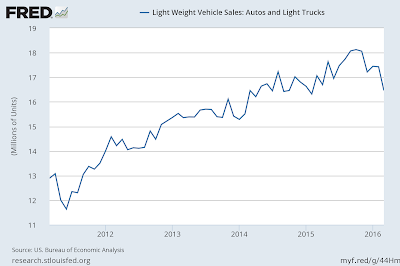