With this morning's report on consumer prices, let's take a look at inflation and real retail sales. 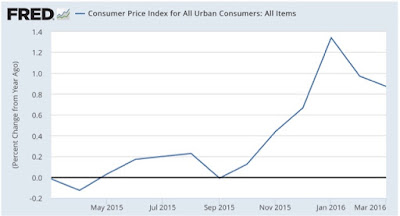 The only thing driving the elevated core measure is owner's equivalent rent, which is due to a shortage of rental construction, as an increasingly nationwide and oligopolized market of builders focused instead on higher margin luxury houses, frequently all cash purchases by foreigners.  There is absolutely nothing in this report which ought to cause the Fed to consider raising interest rates.

Now, on to retail sales.  First of all, real retail sales have gone sideways since last July: 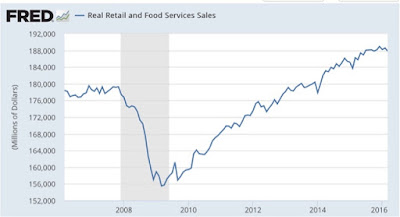 There hasn't been any significant decrease, but the flatness is reminiscent of most of 2006-07.

This is true even if we strip out motor vehicle sales (blue in the graph below), which have looked increasingly wobbly: 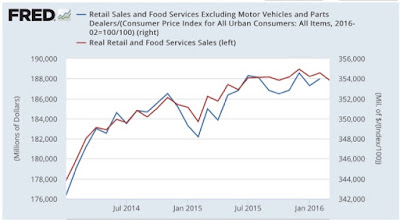 So far, not so good, especially since both real retail sales and motor vehicle sales are short leading indicators, meaning they are forecast virtually no growth in GDP in the quarter or two ahead.

Finally, let's compare these monthly measures with one of my favorite weekly indicators, Gallup's daily consumer spending.  Gallup's measure is nominal, not inflation-adjusted, and does not include motor vehicles.  They don't publish YoY charts, but here is their graph of monthly sales for the last 8 years: 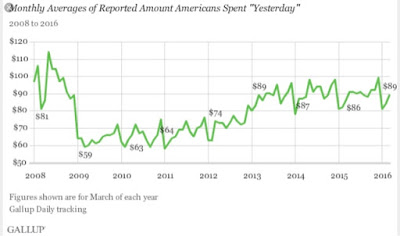 On a YoY basis, Gallup consumer spending went negative immediately after Christmas 2014, and stayed that way through 2015.  So far this year, however, it has been almost relentlessly positive.

Now here are YoY nominal retail sales for the last 2 years, both including (red)  and excluding (blue) motor vehicles: 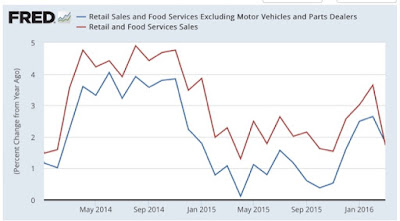 Excluding motor vehicles, YoY retail sales suddenly went flat at the beginning of 2015, and just as suddenly went positive so far this year (even if less positive in March), almost exactly tracking Gallup, offering further validation of Gallup's daily measure as a very good real-time nowcast of consumer spending.
Posted by New Deal democrat at 9:30:00 AM