Yesterday I outlined my basic theory on the US economy since the end of the great recession and also talked about the good economic elements going forward.  Now, let's look at the bad and ugly.

Not all is well with the consumer sector as evidenced by the following graphs: 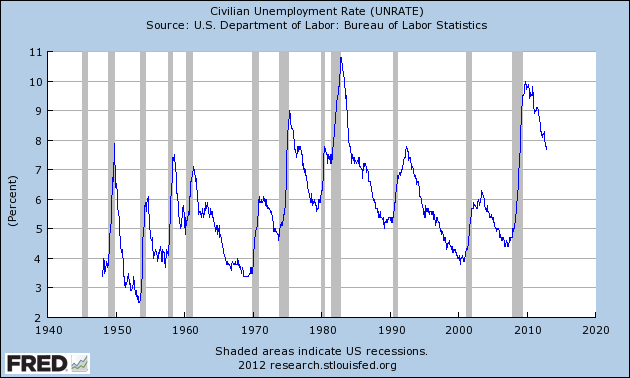 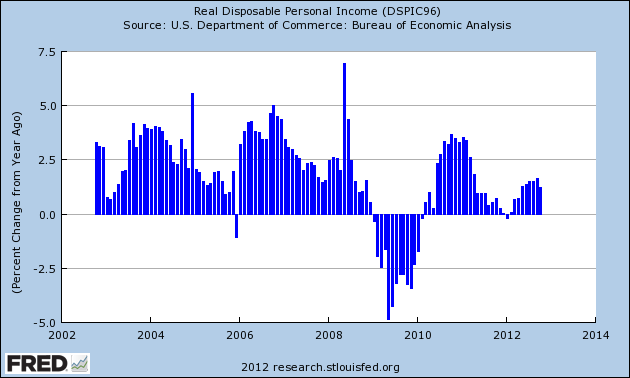 I believe these two charts throw cold water on the idea that the US economy -- whose growth is comprised mostly of consumer spending -- will grow at a stronger pace than right around 2% (give or take) for the first half of next year.   There is simply too much slack in the economy to allow for upward wage pressures, leading to increased wages and stronger, sustainable consumer spending until at least August 2013 (3Q13).

Also adding to the negative sentiment going forward is the fiscal cliff.  Should no deal be worked out, we'll see spending cuts and a tax increase that will hurt growth, and probably lead to a shallow recession in the first half of 2013.

Substantial changes to tax and spending policies are scheduled to take effect in January 2013, significantly reducing the federal budget deficit. According to CBO’s projections, if all of that fiscal tightening occurs, real (inflation-adjusted) gross domestic product (GDP) will drop by 0.5 percent in 2013 (as measured by the change from the fourth quarter of 2012 to the fourth quarter of 2013)—reflecting a decline in the first half of the year and renewed growth at a modest pace later in the year. That contraction of the economy will cause employment to decline and the unemployment rate to rise to 9.1 percent in the fourth quarter of 2013. After next year, by the agency’s estimates, economic growth will pick up, and the labor market will strengthen, returning output to its potential level (reflecting a high rate of use of labor and capital) and shrinking the unemployment rate to 5.5 percent by 2018.

There is also the slowing of monetary velocity: 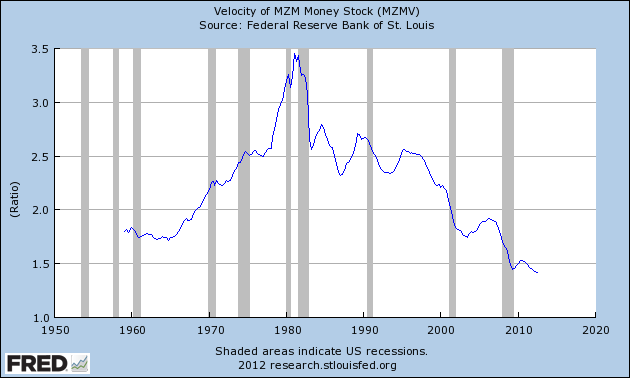 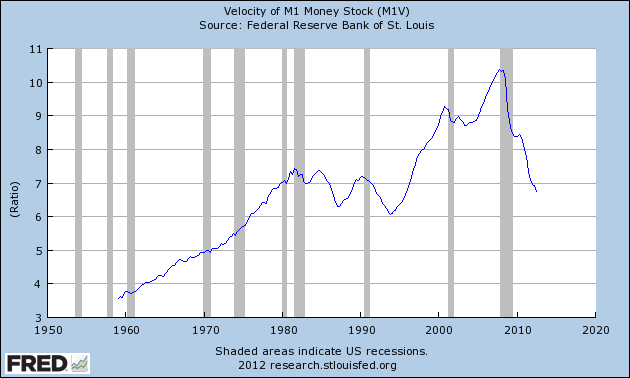 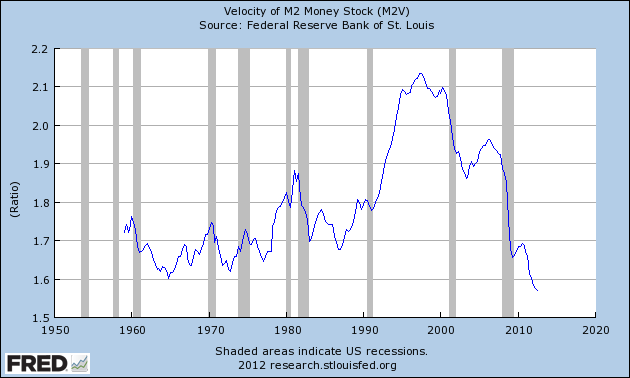 All three monetary aggregates -- MZM, M1 and M2 -- have a decreasing velocity.  This tells us that the pace of transactions is slowing, leading to the conclusion that consumers are hoarding cash. 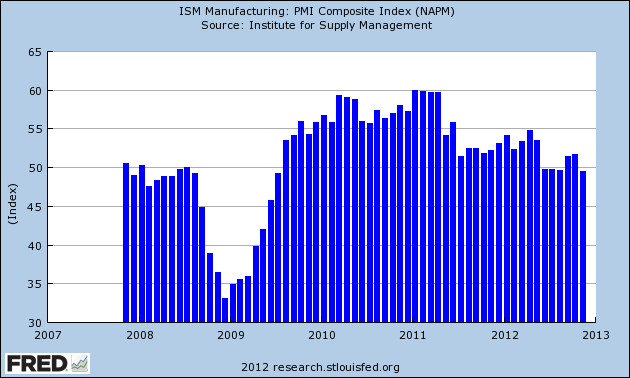 US manufacturing helped to pull the economy out of the great recession.  Unfortunately, in the last six months, the ISM index has printed below 50 four times, indicating manufacturing contraction.  Consider the following anecdotal points from the latest ISM report:
Notice that the primary responses indicates either slowing activity or uncertainly caused by the situation in Washington.  There is also concern regarding the international situation (see below).  None of these statements bodes well for the future.

The ugly is all international.  As I noted last week, three big international economies -- Japan, the UK and the EU -- are all in terrible shape.  Japan and the EU are in a technical recession, and the UK has seen little meaningful growth since 2008.   It's difficult seeing the US grow at strong rates in any way with these three economic trading partners in such bad shape.

These three economies greatly cloud the overall horizon and add nothing but potential downward pressure on US growth.

While there are bright spots for the US economy, there are simply too many dark clouds to hope for anything other than sub-par growth for the next 6-12 months.  Although consumers are confident enough to make durable goods purchases, the fiscal cliff, high unemployment, slow wage growth, slowing monetary velocity and a terrible international situation lead to the conclusion there is far more downside than upside to 2013.