The Fits and Starts Expansion Gets Stuck In The Mud

A little more than three years ago, I wrote a piece titled "the Fits and Starts Expansion" where I wrote the following:


I am also on record as saying growth will be weak, printing somewhere in the 1% to 2% range with high unemployment. It's extremely important to remember where certain numbers were just recently. For example, an economy that loses over 600,000 jobs over a series of months is not going to print a positive jobs number for some time. That's simply the way an economy the size of the US's works. To expect otherwise is very unrealistic.

I basically argued that the economy would be moved by lower consumer spending (somewhere between 0%-2% year over year growth), Asian economies expanding, manufacturing ramping up, inventory adjustments,  and stimulus spending.  For the last three years, we've seen the above scenario pretty much play out.

The reason for this trip down economic memory lane is that we've been seeing the more or less same economic situation for the last year or so -- meandering growth that's very ill-defined and extremely lackluster.  US unemployment has been stuck a little over 8% for the last year.  GDP growth is incredibly uneven and at times barely positive.  Our political system is dominated by two parties, the first of which completely embraces abject ignorance and stupidity ("raise your hand if you if you don't believe in evolution or global warming") as its central policy platform while the second continues to demonstrate a complete lack of leadership or any meaningful policy advances ("No, really, we have a platform and are going to implement it").

On this point, consider the following charts: 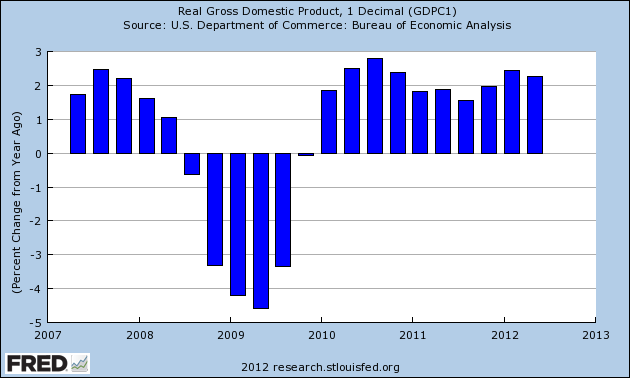 The year over year percentage change in real GDP has been fluctuating right around 2% for the last 7 quarters. So, yes, we're growing, but no, it's hardly exceptional growth.  As a result, 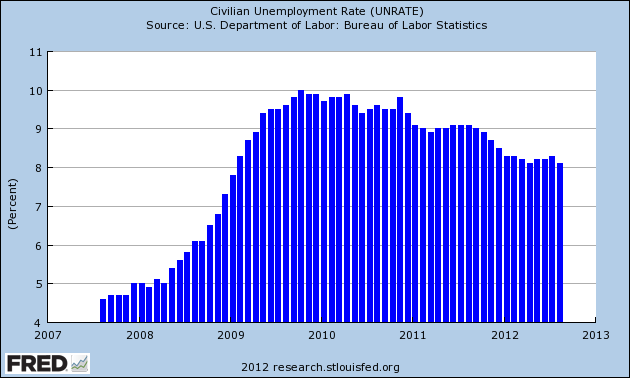 the unemployment rate has been meandering lower for the last 2-3 years.  Most importantly, it's been stuck at over 8% for the duration of this expansion.

The point I'm trying to make is that we're stuck in this slow growth environment and can't seem to get out.  As a result, unemployment just isn't going to budge in any  meaningful way.