Overall, Asia is slowing down.  Let's take a look at some of the macro data to get a good look at what exactly is happening.

Last week, South Korea announced that GDP increased .4% from the previous quarter.  This indicates that the Chinese slowdown is bleeding into other Asian countries.

Above is a GDP chart for the last 10 quarters.  First, while the economy came out of the recession printing strong numbers in 2010, there has been an overall slowdown over the six quarters starting in 2011.  There are several reasons for the slowdown.  First, in the six quarters since 1Q11, we've seen an investment contraction in four.  Second, notice the slow pace of final consumption expenditures -- the largest gain was 1.5% in 1Q12, but this figure is an anomaly when compared with the .4% in 3Q11 and .3% in 2Q12.  Also note that in two quarters we see a decline in exports -- the real strength of the South Korean economy.  In short, we see there is a broad based reason for the overall slowdown in South Korean GDP. 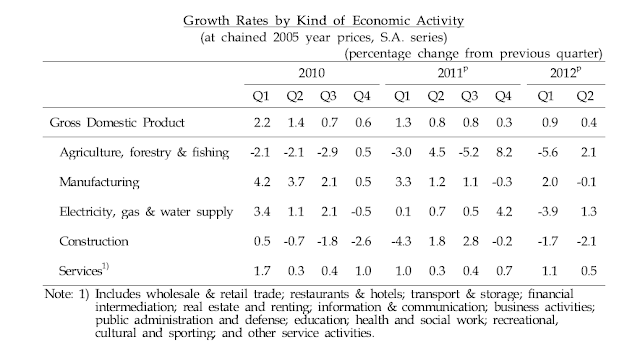 Above is a graph that shows the growth rates of various economic sectors.  In the last six quarter, manufacturing has contracted twice.  Additionally, construction has contracted four times; they're also printed three contractions in a row.  While we see a big drop in electricity in 1Q12, this is probably a simple dropping off of growth from the fourth quarter.

In short, South Korea appears to be slowing in a variety of economic areas. 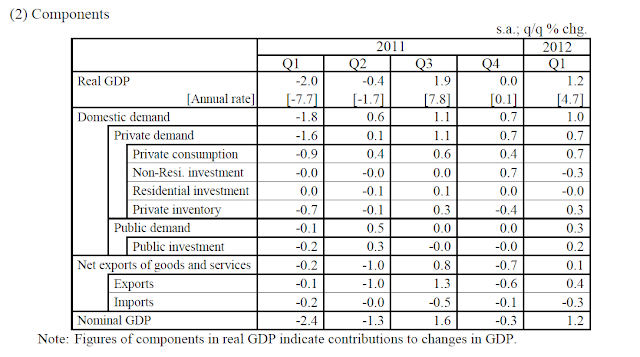 First of all, remember that in 2011, Japan was hit by a natural disaster, leading to the contraction in the first half of the year.  Since then, we've seen two quarters of growth and one of zero growth.

Exports -- the previous driver of Japanese growth -- has also been stuck, only contributing to growth in one quarter over the last year.

What the above chart tells us is Japanese growth is getting hit from a variety of sectors.  This creates some big problems from a policy perspective for the Japanese authorities.

Here is the latest domestic report from the Reserve Bank of India:

9. Gross Domestic Product (GDP) growth decelerated over four successive quarters from 9.2 per cent in Q4 of 2010-11 to 5.3 per cent in Q4 of 2011-12. Significant slowdown in industrial growth as well as deceleration in services sector activity pulled down the overall GDP growth to 6.5 per cent for 2011-12, below the Reserve Bank’s baseline projection of 7 per cent.

10. On the expenditure side, significant weakness in investment activity was the main cause of the slowdown. Gross fixed capital formation, which grew by 14.7 per cent in Q1 of 2011-12, moderated to 5.0 per cent in Q2 and then contracted by 0.3 per cent in Q3 before recovering to a growth of 3.6 per cent in Q4. Growth in private consumption also decelerated in 2011-12, even as it remained the key driver of growth. The positive impact of the rupee depreciation on exports is yet to be seen.

12.  During the ongoing monsoon season, rainfall up to July 25, 2012 was 22 per cent below its long period average (LPA). The Reserve Bank’s production weighted rainfall index (PWRI) showed an even higher deficit of 24 per cent. Further, the distribution of rainfall was very uneven, with the North-West region registering the highest deficit of about 39 per cent of LPA. If the rainfall deficiency persists, agricultural production could be adversely impacted.


Like other Asian countries, we see an overall slowdown.  However, India also has higher than average inflation (along with extensive political gridlock), preventing the central bank from lowering rate. 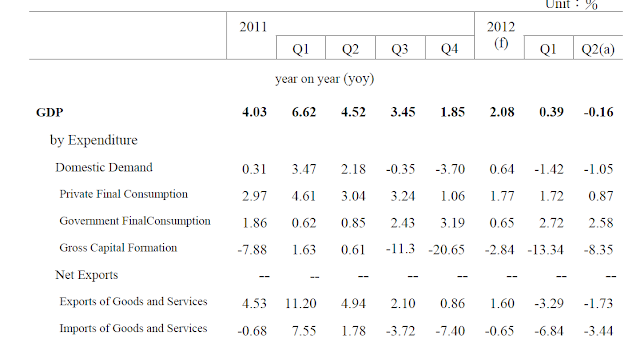 First, the overall print isn't that bad -- a contraction of .16%, which could simply be explained as statistical noise.  However, notice the breadth of the underlying weakness: domestic demand has dropped for two quarters, gross capital formation has contracted for four quarters and exports have dropped all year.  This is not a good sign, as it tells us the slowdown is pretty broad based.

Looking at the same data from a "percent contribution" perspective, we get the following table: 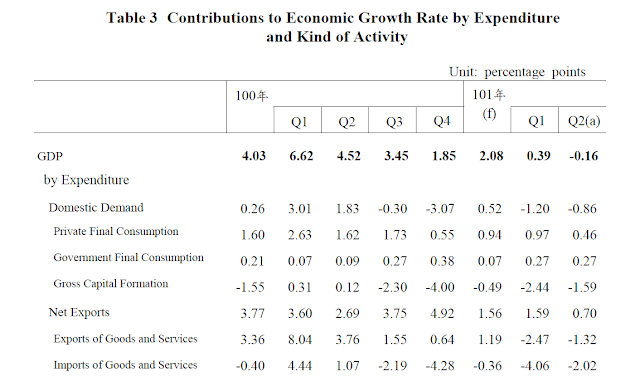 Again, notice the breadth of the overall slowdown -- and how that breadth is hitting overall growth.


Based on advance estimates1, the economy contracted by 1.1 per cent on a quarter-on-quarter seasonally-adjusted annualised basis, compared to the 9.4 per cent expansion in the preceding quarter. On a year-on-year basis, the economy continued to grow at a modest pace of 1.9 per cent, following the 1.4 per cent growth in the previous quarter.

Here's a look at their data (from the above report): 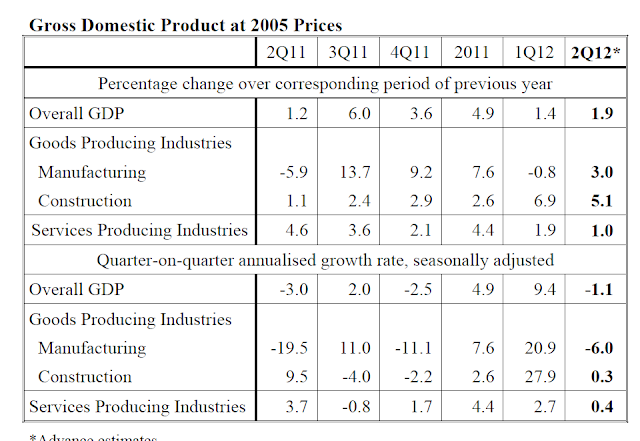 Note the 1.1% contraction, which was caused by a drop in manufacturing -- which showed a 6% Q/Q contraction.  Also note the slowdown in construction -- which contracted from a 27.9% Q/Q expansion to a .3% and services - which slowed from a 2.7% Q/Q growth rate to a .4%.  The construction slowdown can be explained by the rapid growth in the first quarter; obviously the industry front loaded contracts for a variety of reasons.

This is a broad based slowdown caused by the EU weakness and Chinese slowdown.