Vehicle sales and the onset of recession

A lot of the recent economic data has been weak, but weakness does not necessarily equate with actual contraction.

It's well to keep in mind the sequence of events that typically leads both recessions and recoveries, as identified by the research of Prof. Edward Leamer. First housing turns, then durable goods like cars, then nondurable and consumer goods.  To some extent that was violated in the 2009 recovery, as housing simply stabilized in spring 2009 at the same time as vehicle sales bottomed.

Since the beginning of 2011, housing permits and starts have increased in a trend that is presently about about 200,000 a year, which on average translates into growth of about 4% a year within 2 years thereafter.

So what about vehicle sales?  Here we have an even more limited data set than in other cases, so extra caution is required, but the data we do have is reasonably consistent once we measure quarterly to smooth out some of the month to month variability:  for the 5 recessions since the data starts in the mid-1970s, at least a 10% decline in vehicle sales since the quarterly peak has taken place before a recession started. 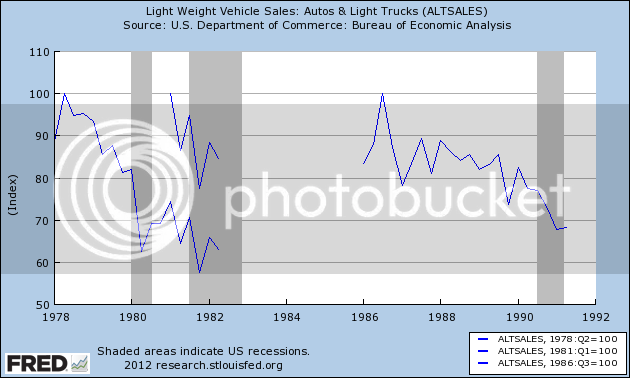 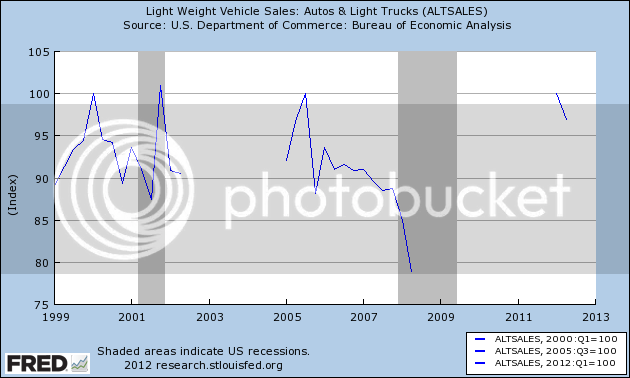 So far there has only been about a 3% decline from the first quarter's peak of 14.5 million annualized vehicle sales.  If the past pattern holds, it would take a quarterly number of 13.1 million or fewer  vehicle sales annualized to be compatible with the onset of a new recession.

It's also worth noting that with the exception of the 1981 recession where the Federal Reserve suddenly and dramatically raised interest rates, where the next recession began only two quarters after the peak, no recession has begun until at least 6 quarters later.

In other words, based on admittedly limited past data the decrease in auto sales has not gone on long enough or deeply enough to be consistent with a renewed recession.
Posted by New Deal democrat at 2:00:00 PM