I don't envy the ECB.  First, they have to set interest rate policy for a host of countries in a variety of economic positions.  For example, over the last year, their policy impact was felt in countries that were doing fairly well (Germany) and countries that were falling apart (Greece).  These are not ideal conditions from which to operate monetary policy.

That being said, there are legitimate questions about the ECB's most recent actions.  For example, last week the ECB lowered interest rates.  Why they didn't do this earlier has perplexed several commentators, largely because the situation in the EU has grown more dire over the same period -- and this was against a backdrop of increasing negativity caused by the Greek situation.  In the ECB's defense, I would add that they may have been waiting to act for a more dramatic time, largely because there is really very little more they can do from an interest rate perspective.

But, all that being said, the poor situation in the EU has been known for some time.  Consider the following from the latest EU economic bulletin:


On a quarterly basis, euro area real GDP growth was fl at in the first quarter of 2012. Available indicators for the second quarter of the year point to a weakening of growth and highlight prevailing uncertainty. Looking beyond the short term, the euro area economy is still expected to recover gradually. However, ongoing tensions in some euro area sovereign debt markets and their impact on credit conditions, the process of balance sheet adjustment in the financial and non-financial sectors and high unemployment are expected to continue to dampen the underlying growth momentum. The June 2012 Eurosystem staff macroeconomic projections for the euro area foresee annual real GDP growth ranging between -0.5% and 0.3% in 2012 and between 0.0% and 2.0% in 2013. Compared with the March 2012 ECB staff macroeconomic projections, the range predicted for 2012 remains unchanged, while there is a slight narrowing of the range predicted for 2013. The economic outlook for the euro area is subject to increased downside risks. 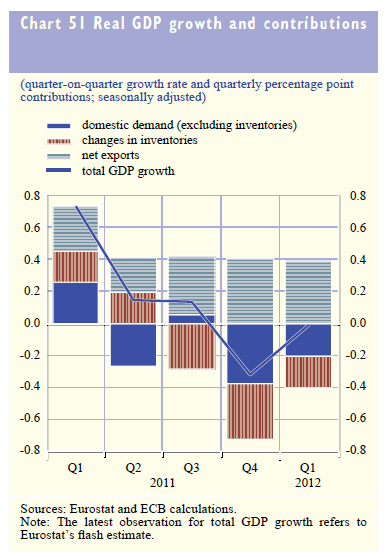 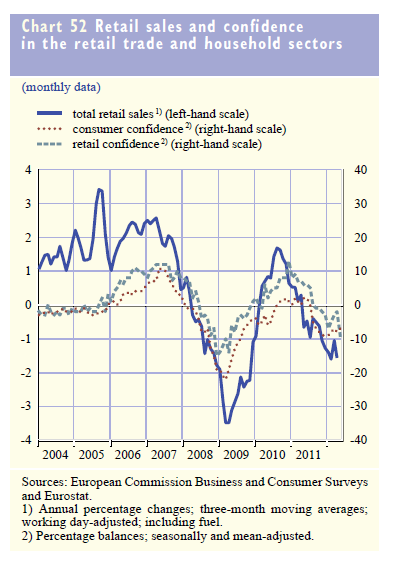 In addition, consider the chart above of total retail sales.  The trend has been consistently dropping since the end of 2010.  This would add fuel to the above comments.

However, in the ECBs defense, there is this:


The sluggish developments in consumption largely refl ect movements in real income, which is among the main determinants of consumer spending trends. Growth in aggregate real income started to decline in the course of 2011, on the back of weaker employment growth, and was further eroded by rising inflation. Household income in real terms declined year on year in the fourth quarter of 2011 for the second consecutive quarter. This, combined with continued elevated inflation, renewed uncertainty regarding the economic outlook and fiscal retrenchment, led to the household savings ratio rebounding somewhat from near pre-crisis lows.

Inflationary pressures were heating up in the EU area over this time, largely due to the increase in oil prices.  At this point, we need to ask an important question: should the ECB have allowed its inflation targets and policy preference rise in order to allow them more latitude in interest rate policy (and central bank policy in general)?  There is no easy answer to this question.  Most central bankers would argue that their "inflation fighter" stance has been hard won, and any compromise in that position would hurt their market credibility.  Others would argue that these are extraordinary times requiring extraordinary action.

The above chart of the overall EU inflation rate shows that it was rising from 2010 to mid-2011 when it leveled off and started moving lower.  However, it was still at levels that would make a central banker uncomfortable.  From their perspective, they're thinking that 3% can easily morph into 4.5%, at which time containment is far more difficult -- especially as that may lead to a degradation of the market's confidence in the ECB to fight inflation.

The point of the above discussion is to highlight that being a central banker is an extraordinarily difficult job with no easy answers or clear policy directions.