The Problem With India

Consider the following from the latest Reserve Bank of India policy statement:

5. Economic activity in 2011-12 moderated sequentially over the quarters to take growth to a low of 5.3 per cent in Q4, though for the year as a whole it was 6.5 per cent. Deceleration in industrial production from the supply side and weak investment from the demand side have, in particular, contributed to the growth slowdown. The index of industrial production (IIP) increased by just 0.1 per cent in April 2012. Even as the manufacturing Purchasing Managers’ Index (PMI) for May suggested that industrial activity remains in an expansionary mode, there is no question that the pace of expansion has slowed significantly.

6. In this context, it is relevant to assess as to what extent high interest rates are affecting economic growth. Estimates suggest that real effective bank lending interest rates, though positive, remain comparatively lower than the levels seen  during the high growth phase of 2003-08. This suggests that factors other than interest rates are contributing more significantly to the growth slowdown.

7. Further, one implication of the rupee depreciation over the past several months is that domestic producers have gained in competitiveness over foreign producers. Over time, this should result in expanding exports and contracting imports, thus acting as a demand stimulus.

8. During 2011-12, headline WPI inflation rate moderated from a peak of 10.0 per cent in September 2011 to 7.7 per cent in March 2012. However, during 2012-13 so far, provisional data suggest that it inched up from 7.2 per cent in April to 7.6 per cent in May, driven mainly by food and fuel prices. Primary food articles inflation rose from negative [(-) 0.7 per cent)] in January to 10.7 per cent in May largely due to a sharp increase in vegetable prices. Protein inflation continued to be in double digits. With food prices contributing so heavily to headline inflation, the performance of the south-west monsoon will also play a role in determining inflationary conditions over the course of the current year.

9. Though international crude prices have fallen significantly from their levels in April 2012, the rupee depreciation has significantly offset its impact on wholesale prices. Further, even at the current lower level of global crude oil prices, significant under-recoveries persist in respect of administered petroleum product prices. The positive development on the inflation front is that core (non-food manufactured products) inflation has trended down.

10. Consumer price index (CPI) inflation (as measured by the new series, base year 2010) rose from 8.8 per cent in February to 9.4 per cent in March and further to 10.4 per cent in April. Significantly, CPI inflation, excluding food and fuel, was also in double digits suggesting that moderation in wholesale price inflation has not transmitted to the retail level.

11. Notwithstanding the moderation in core inflation, the persistence of overall inflation both at the wholesale and retail levels, in the face of significant growth slowdown, points to serious supply bottlenecks and sticky inflation expectations. Also, in the absence of pass-through from international crude oil prices to domestic prices, the consumption of petroleum products remains strong distorting price signals and preventing the much needed adjustment in aggregate demand. The consequent subsidy burden on the Government is crowding out public investment at a time when reviving investment, both public and private, is a critical imperative. The widening current account deficit (CAD), despite the slowdown in growth, is symptomatic of demand-supply imbalances and a pointer to the urgent need to resolve the supply bottlenecks.

Let's place the above information in context:

Growth is clearly decelerating.  Growth has moved from 9.4% in early 2010 to 5.3% now.  While this rate of growth still looks impressive, the overall decline (which has been consistent) is obviously concerning.  Also note that with one of the largest populations in the world -- and a population that is overwhelmingly poor -- India needs to maintain a far faster growth rate than a developed country.

India has never really tamed its inflation rate.  There was a decent drop at the end of last year, but now inflation is again on the rise.

The combination of slower growth and higher inflation places the central bank in a terrible policy bind.  If it raises rates to slow inflation, growth will drop.  If it lowers rates to increase growth, inflation picks up.  It's a classic no-win scenario. 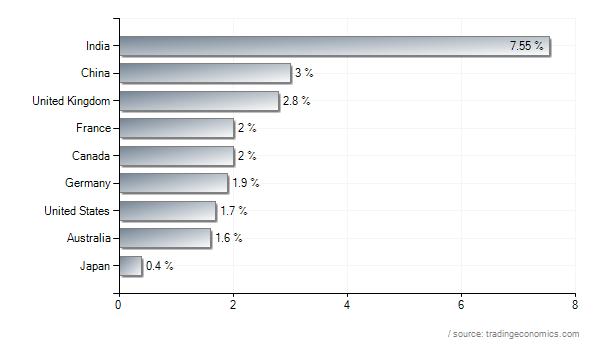 In addition, among major countries, India has the highest rate of inflation by far. 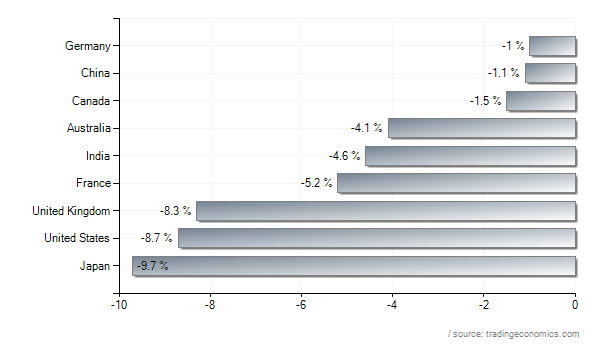 It also has one of the largest budget deficits 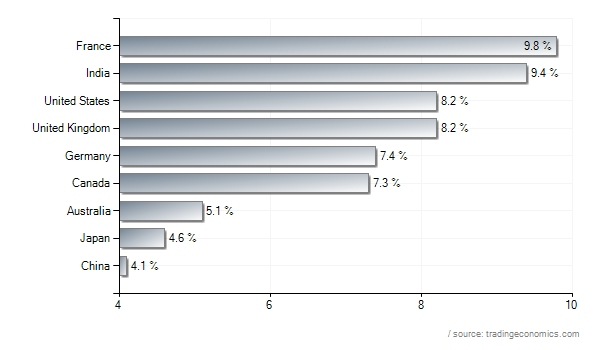 and rates of unemployment. 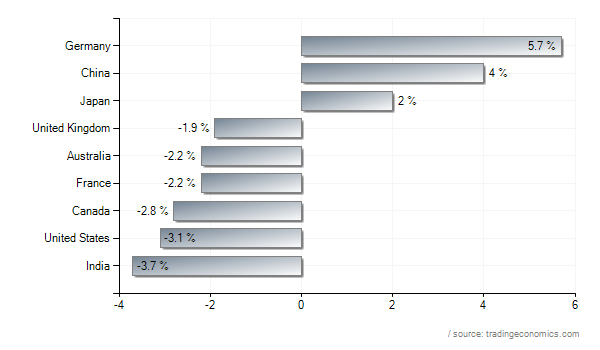 In short, the problems are mounting for India.  The real problem appears to be political, as the ruling parties don't have the will to actually tackle these problems.
Posted by Unknown at 10:00:00 AM