The declining labor force participation rate has been the topic of some debate.  I have argued that the declining rate is the result of the beginning of the baby boomers retiring, while other have argued it's the result of the recent recession.  The Chicago Fed has weighed in with a paper on the topic where they argue that about half of the decline is due to baby boomers retiring.

First, here is a chart of the rate:


Labor force measures are based on the civilian noninstitutional population 16 years old and over. Excluded are persons under 16 years of age, all persons confined to institutions such as nursing homes and prisons, and persons on active duty in the Armed Forces. As mentioned previously, the labor force is made up of the employed and the unemployed. The remainder—those who have no job and are not looking for one—are counted as "not in the labor force." Many who are not in the labor force are going to school or are retired. Family responsibilities keep others out of the labor force.

Putting this all in statistical terms, the denominator of the labor force participation rate fraction is the civilian non-institutional population, which is (same link as above) "... persons 16 years of age and older residing in the 50 States and the District of Columbia who are not inmates of institutions (for example, penal and mental facilities, homes for the aged), and who are not on active duty in the Armed Forces."  The labor for is, "all persons classified as employed or unemployed in accordance with the definitions contained in this glossary."  The labor force is derived from the household survey, whose methodology is explained in the latest employment report.  It's important to remember that these numbers change every month for a variety of reasons.

The report begins by noting the reason for the increase: 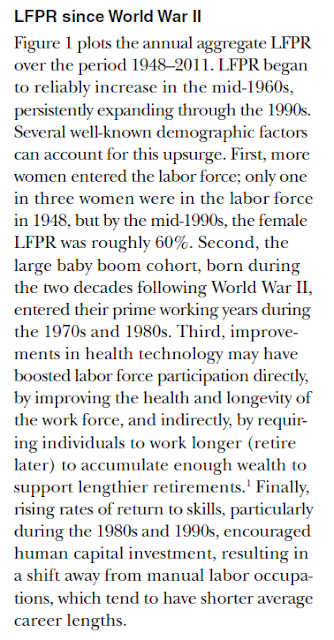 All of these trends are well-known and shouldn't be a surprise.

The reason for the decline in the LFPR as of late is the result of two trends: a decline in younger age employment and the aging of the work force. 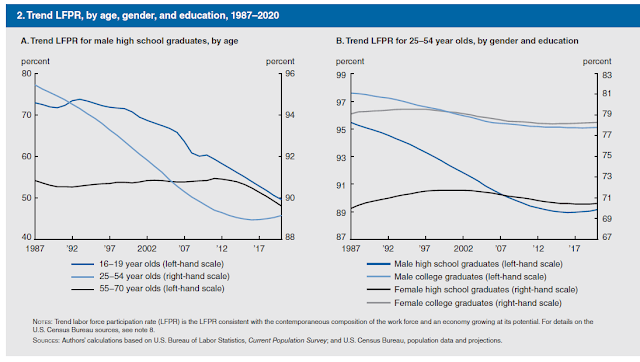 The above left chart shows that the participation rate for 16-19 year olds has been declining for about 20 years, as has the rate of decline in the 25-54 year old age range.  However, also be careful to note the different scales used for the different statistics -- the one for teenagers is far sharper than the others.  Simply put, high school kids either aren't working or have been squeezed out of the labor force, or some combination of both.

The graph on the right shows that male high school graduates are the primary reason for the drop off in the LFPR for the "working ages," which probably indicates the increasing need for a higher educational achievement to be a member of the working age population.

The report concludes that about half of the recent decline is due to the recession while the other half is due to the aging work force.