Is job growth getting ready to accelerate?

Just about the only drawback in Friday's employment report is that at the rate employment has been growing since it bottomed 2 years ago, it will take possibly a decade to make up all of the jobs lost plus population growth since 2007. Even job growth of 250,000 a month would be downright tepid for the 1980s or latter part of the 1990s. To substantially accelerate real, population adjusted job growth, we need monthly improvement of 300,000+ or even 400,000+ jobs.

And there are signs that we may be on the verge of achieving at least the lower part of that range in the very near future.

First of all, let's look at updated graphs showing the relationship of the rate of initial jobless claims with the unemployment rate. Here's the long term graph: 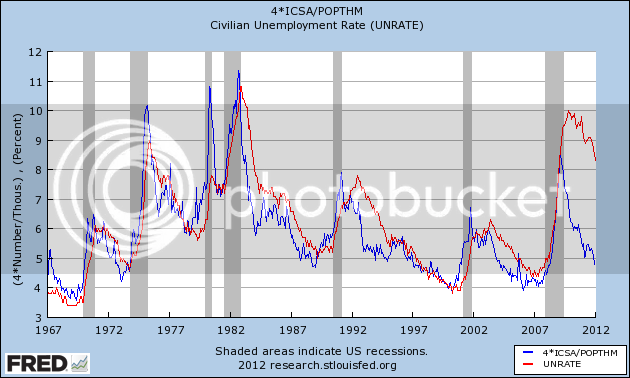 Here's the close-up of the last several years (note: rate of initial jobless claims scaled on the right) after their divergence in 2009: 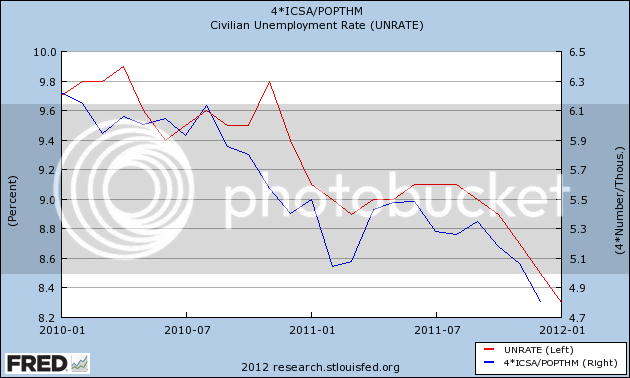 But not only is there good evidence to support the argument that the unemployment rate should decline, there is also evidence that the rate of employment growth should actually increase.

Initial jobless claims peaked at the end of March 2009. Since May of that year there has been a fairly constant ratio of changes in weekly initial claims to monthly job growth of roughly 1 to 2.75. That is, for every 10,000 drop in average weekly new jobless claims in a given month, the number of jobs added to the economy has improved by 27,500. 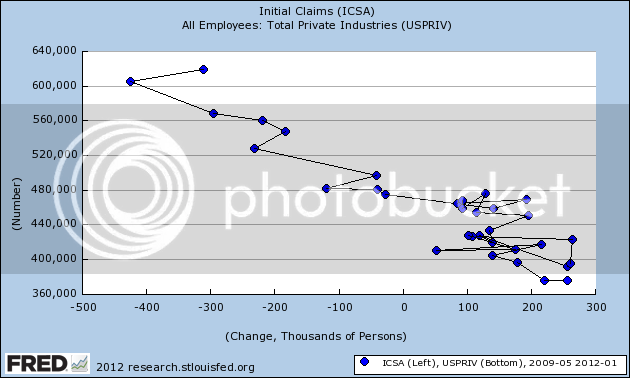 There are three reasons to believe that relationship might be shifting for the better.

First of all, during recessions there is typically a steeper loss in hours than in the number of jobs. During recoveries, initially hours increase faster until they make up the difference, and thereafter the two series move in tandem. Here's a longer term graph showing the relationship: 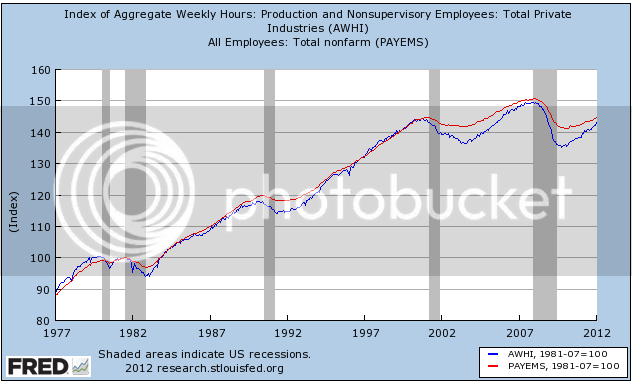 This recession and recovery have been no different: 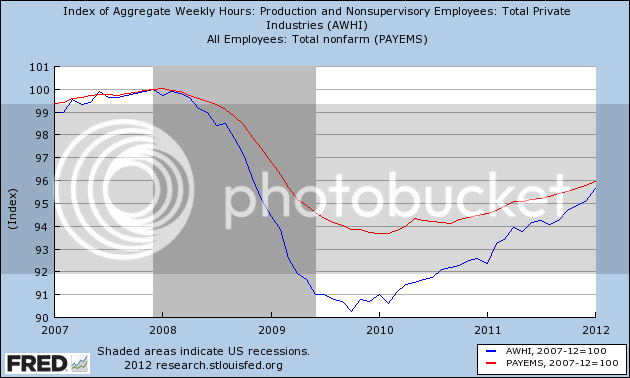 As the above graph shows, however, at the current rate aggregate hours will make up all of their relative losses by summer. In fact, measured strictly in private jobs, the measure has fully caught up as of this month. From that point forward job growth should accelerate to match growth in hours.

As an aside, remember that long leading indicators like housing permits, bond prices, and real money growth have been improving almost relentlessly for about a year now. Shorter leading indicators like stock prices, initial jobless claims, and durable goods, have joined them in showing improvement for the last few months. Real retail sales, which I have previously described as the "holy grail" single best predictor of future job growth, have also continued to improve, albeit slowly.

Payroll growth and aggregate hours, by contrast, are coincident measures of the economy. Thus with improving leading indicators, there is every reason to expect aggregate hours to continue their trend of improvement. That means job growth should start moving in tandem within the next 3-6 months.

Secondly, the household survey has been on a tear for the last seven months, adding 2.252 million jobs, or over 320,000 a month, during that time [Note: without the census adjustment, the numbers would be slightly lower, at 2.020 million and 290,000 a month]: 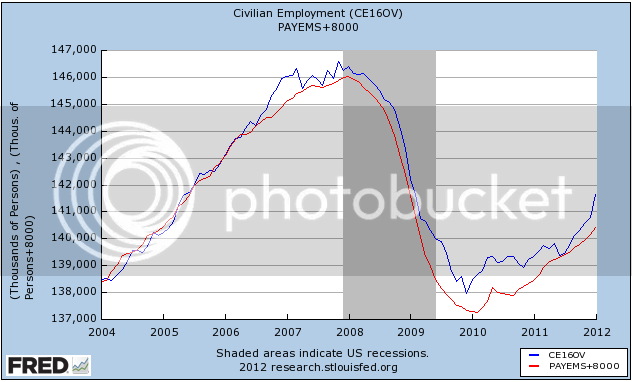 The household survey has a much smaller survey sample, and so any given month's change is inherently less reliable, but there is evidence that the household survey leads the establishment survey at inflection points, as indeed it did at the end of 2009. While the surge since last June might be noise, it looks very much like an inflection point that is beginning to show up in the establishment survey.

Third, there is one specific sector in which it appears significant improvement is finally taking place: construction. As the below graph shows, while manufacturing jobs picked up almost immediately (in fact, this is the best improvement in 20 years save for the tech boom), construction jobs continued to languish, finally hitting bottom 12 months ago: 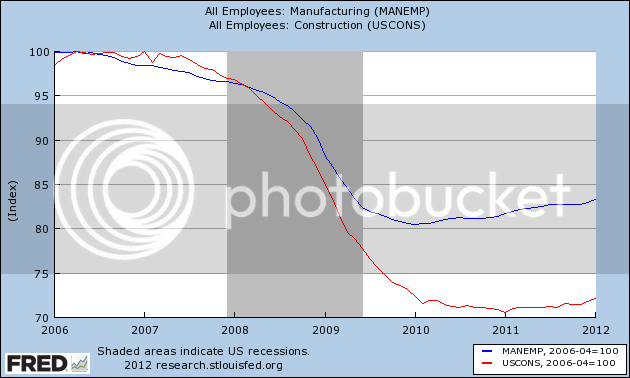 There are excellent reasons to believe that construction employment will improve, and improve at an accelerating rate. 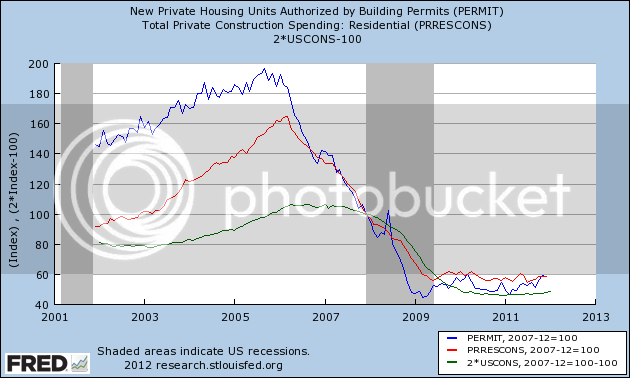 Now let's look at a close-up of the last several years: 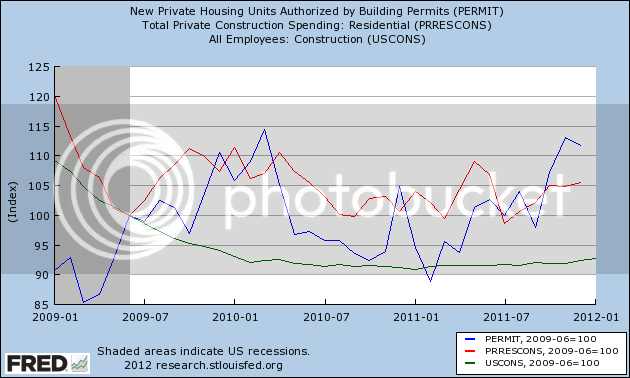 Just like the tsunami in Japan last year, there are any number of factors which could derail this analysis. But since the unemployment rate is likely to decline further, job growth is likely to accelerate to the trend of increasing aggregate hours, the household survey suggests acceleration is already occurring, and the construction sector is finally participating in meaningful job growth, there is every reason to believe that the rate of job growth is going to accelerate in the coming months.
Posted by New Deal democrat at 2:00:00 PM