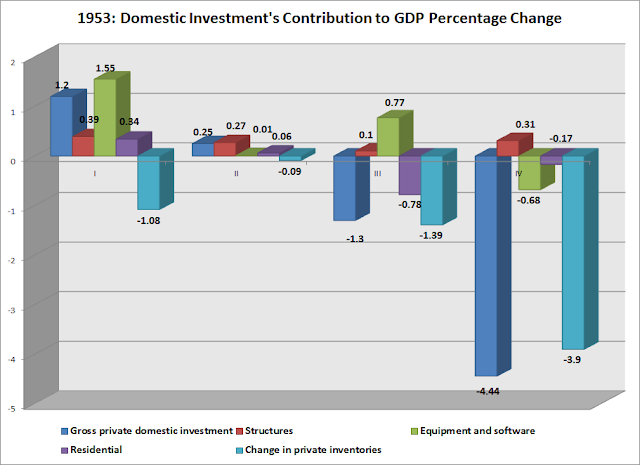 The above chart shows the dual nature of 1953's investment picture.  In the 1Q, overall investment added 1.2% to overall GDP growth, with equipment and software accounting for the lions share of the investment.  However, even in the first quarter, we see that inventory investment subtracted a fair amount from growth.  This trend became far more pronounced by the end of the year, when the inventory contraction accounted for a large drop in the overall contribution of investments to GDP growth.

As the Federal Reserve's report for the year explains, the drop in war spending is a big reason for the drop:


After midyear the pace of economic activity slackened appreciably as business buying for inventory dropped sharply and as fresh expansive forces were lacking. At this time reductions in defense spending came to be more widely anticipated. A truce in Korea was agreed to in July, and international tensions appeared to be easing somewhat. Business concerns and the armed services reduced new ordering and, with new orders below shipments, unfilled orders declined sharply from earlier high levels. Reflecting the effect of reduced output accompanying these developments, the buildup of business inventories, which had been at a seasonally adjusted annual rate of 6 billion dollars in the second quarter, was considerably retarded in the third quarter and turned into moderate liquidation in the fourth quarter. At that time, as the chart shows, stocks were being reduced by both manufacturers and distributors. The principal reductions were in stocks of durable goods, which earlier had advanced most. 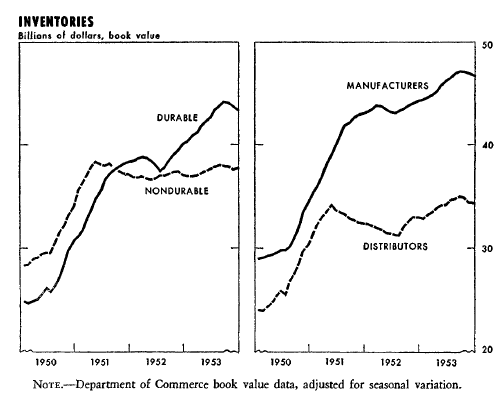 I'll explain the recession that started mid-1953 in more detail later.  However, as production dropped from the drop in war spending, we also see a drop in consumer purchases of heavier items (cars and furniture/household goods).  Hence, the economy was hit by a double-whammy of declining consumer and government demand.