A Closer Look At Manufacturing.

As we close out January, let's take a look at the overall state of US manufacturing.

The Empire State Manufacturing Survey indicates that manufacturing activity expanded in New York State in January. The general business conditions index climbed five points to 13.5. The new orders index rose eight points to 13.7 and the shipments index inched up to 21.7. The prices paid index was positive and slightly higher than it was last month while the prices received index jumped twenty points to 23.1, indicating a significant pickup in selling prices. Employment indexes were positive and higher, pointing to higher employment levels and a longer average workweek. Future indexes conveyed a high degree of optimism about the six-month outlook, with the future general business conditions index rising nine points to 54.9, its highest level since January 2011.

While these are not readings on the level of what we saw last year, they are an improvement from the 4Q11 when indicators went negative for a few months.

Philly appears to be in more or less the same boat:


In January, the seasonally adjusted composite index of manufacturing activity — our broadest measure of manufacturing — increased nine points to 12 from December's reading of 3. Among the index's components, shipments gained fourteen points to 17 and new orders doubled, picking up seven points to finish at 14. The jobs index picked up eight points to 4.

Most other indicators also suggested stronger activity. The capacity utilization indicator advanced eight points to finish at 8, while the index for backlogs of orders gave up five points to end at −4. Additionally, the delivery times index was almost unchanged at 3, while our gauges for inventories were mixed in January. The finished goods inventories index lost fourteen points to 9, while the raw materials inventory index gained five points to end at 18.

Texas manufacturing, however, was weaker:


Texas factory activity weakened slightly in December, according to business executives responding to the Texas Manufacturing Outlook Survey. The production index, a key measure of state manufacturing conditions, posted a second negative reading but moved up from –5.1 to –1.3. This suggests a slowing of the pace of decline.

Other measures of current manufacturing conditions indicated flat activity in December. The new orders index suggested stagnant demand, registering a near-zero reading after dipping into negative territory last month. The shipments index was little changed from its November reading and continued to suggest flat shipment volumes. The capacity utilization index was also near zero although it rebounded from last month, rising from –10.2 to 0.7.

Kansas, however, was printing just over 0:


The month-over-month composite index was 7 in January, up from revised totals of -2 in December and 4 in November (Tables 1 & 2, Chart).  The composite index is an average of the production, new orders, employment, supplier delivery time, and raw materials inventory indexess  Manufacturing activity increased in both durable and nondurable goods-producing plants, with

particular strength in chemical, fabricated metal, and aircraft production. Most other month-over-month indexes also improved in January. The production and shipments indexes jumped to their highest levels since June, and the new orders index climbed from -2 to 8. The order backlog index was positive for the first time since last summer, and the employment index rebounded from -5 to 9.  The new orders for exports index increased and the raw materials inventory index  moved higher, while the finished goods inventory index was unchanged.


Industrial production increased 0.4 percent in December after having fallen 0.3 percent in November. For the fourth quarter as a whole, industrial production rose at an annual rate of 3.1 percent, its 10th consecutive quarterly gain. In the manufacturing sector, output advanced 0.9 percent in December with similarly sized gains for both durables and nondurables. The output of utilities fell 2.7 percent, as unseasonably warm weather reduced the demand for heating; the output of mines moved up 0.3 percent. At 95.3 percent of its 2007 average, total industrial production in December was 2.9 percent above its level of a year earlier. The capacity utilization rate for total industry rose to 78.1 percent, a rate 2.3 percentage points below its long-run (1972--2010) average. 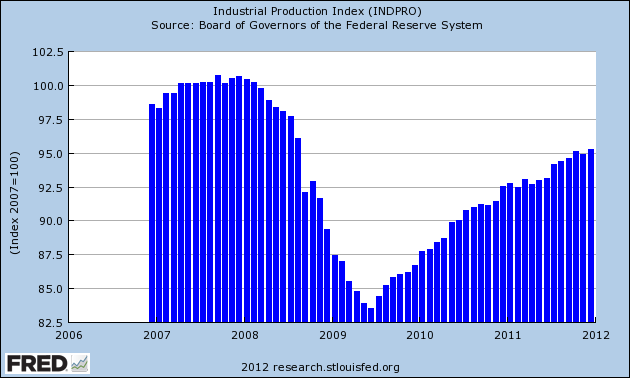 And the latest ISM was good:


"The PMI registered 53.9 percent, an increase of 1.2 percentage points from November's reading of 52.7 percent, indicating expansion in the manufacturing sector for the 29th consecutive month. The New Orders Index increased 0.9 percentage point from November to 57.6 percent, reflecting the third consecutive month of growth after three months of contraction. Prices of raw materials continued to decrease for the third consecutive month, with the Prices Index registering 47.5 percent, which is 2.5 percentage points higher than the November reading of 45 percent. Manufacturing is finishing out the year on a positive note, with new orders, production and employment all growing in December at faster rates than in November, and with an optimistic view toward the beginning of 2012 as reflected by the panel in this month's survey." 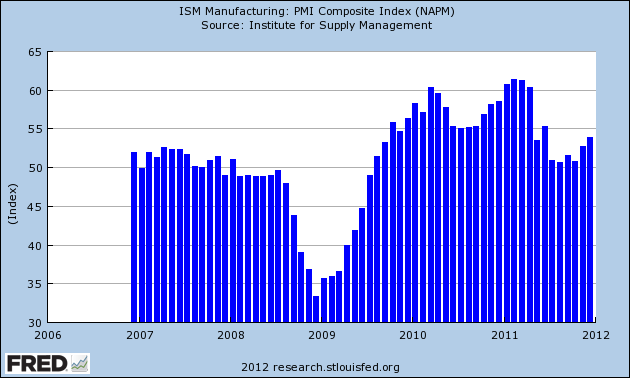 The ISM index moved lower at the end of last year but stayed about 50.  Now it's moving higher again, although the move so far is preliminary.


Manufacturing activity expanded in most Districts, generally continuing its steady overall expansion or, in the case of Atlanta, reversing a slowdown in prior periods. For the sector as a whole, further growth or improved conditions were reported by almost all Districts, except for Cleveland, Richmond, and Dallas, which reported that activity was largely stable or mixed, and Kansas City, which noted a slight decline. The strongest reports came from subsectors such as heavy equipment manufacturing and steel, for which demand has been boosted by robust growth in the energy, agricultural, and auto manufacturing sectors. Reports from Cleveland, Richmond, Atlanta, Chicago, and St. Louis confirmed vibrant activity for auto manufacturers, primarily for domestic makes. By contrast, demand remained somewhat weak for firms in housing-related subsectors, such as a door manufacturer in the Richmond District, furniture manufacturers there and in the St. Louis and San Francisco Districts, and makers of lumber and wood products in the San Francisco District. Demand for computers and related electronic components rose further, according to Kansas City, Dallas, and San Francisco. However, the pace of growth has slowed significantly from earlier in 2011, and Boston noted declining sales of semiconductors, mainly due to weaker demand from Asia. According to Dallas and San Francisco, aircraft makers saw further demand increases. Those Districts also noted weak domestic demand for refined petroleum products that was largely or completely offset by robust foreign demand. Demand grew smartly for food producers in the Philadelphia and Dallas Districts, but in the Kansas City District food processing was one of the weakest performers within the manufacturing sector. Export sales of assorted manufactured products generally performed well according to Atlanta and Chicago, although slower economic growth in China and Europe held back sales for some manufacturers.

Cleveland reported that capacity utilization remained below normal in most subsectors, with the notable exception of steel producers, who were operating at or near normal levels. Similarly, Chicago noted that some auto suppliers appear to be approaching capacity constraints, which may limit further production increases in the near term. Atlanta reported that recent flooding in Thailand was likely to exert modest restraint on auto production. Ongoing capital investments and increases in capacity were reported for various manufacturing concerns in the St. Louis and Minneapolis Districts and for an auto producer in the Richmond District.


UPDATE: The Dallas Fed printed their number today, and it was beter:

Texas factory activity increased in January, according to business executives responding to the Texas Manufacturing Outlook Survey. The production index, a key measure of state manufacturing conditions, rose from 0.2 to 5.8, suggesting growth resumed this month.

Other measures of current manufacturing conditions also indicated growth in January. The new orders index jumped to 9.5, its highest reading in six months, after two months in negative territory. Similarly, the shipments index turned positive after two negative readings, rising from –1.1 to 6.1. Capacity utilization increased further in January; the index moved up from 4 to 8.5. Twenty-eight percent of manufacturers noted higher capacity utilization, the highest share in nine months.