Yesterday I said, based on trends in initial jobless claims, to expect an increase in private jobs by about +200,000, and a slight decrease in the employment rate. This morning the BLS reported that private jobs increased by +220,000 and the unemployment rate declined to 8.5%. Total nonfarm payrolls increased by +200,000. November's number was revised down by 20,000, but October's was revised up by 12,000. As I like to say from time to time, you're reading the right blog.

Here's the BLS's graph of monthly job changes. While 200,000 is nice, and about 75,000 more than needed to accomodate population growth, we're still not adding jobs fast enough to put a dent into the losses from trend due to the Great Recession: 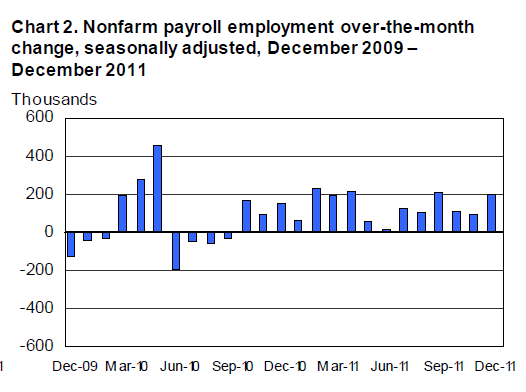 In fact, both the participation rate and the employment to population ratio were unchanged. These have not moved upward significantly since the end of the recession.

Unemployment is certainly trending down: 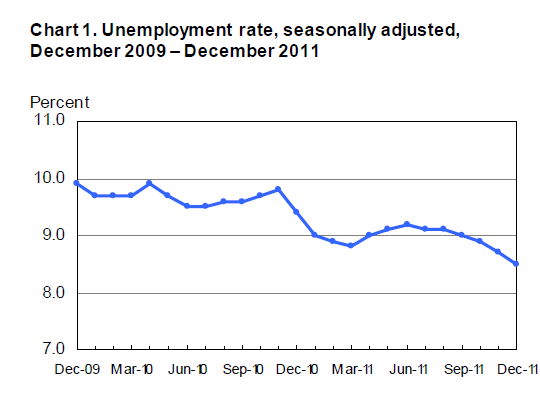 Generally the internals of the report were also quite good. Almost all of the leading indicators in the report fared well. Manufacturing hours were up .1 to 40.5 hours. Jobs in manufacturing were also up, +23,000. Construction added +20,000. Only manufacturing overtime declined, -.1 to 3.2 hours.

One of the other coincident indicators used by the NBER to measure expansion vs recession, aggregate hours, also increased strongly, up .5 to 94.8. Aggregate hours continue to increase more strongly than actual job additions. Once these have "caught up" to their pre-recession trend, I expect job growth to be more robust.

The diffusion index - a measure of how many sectors were adding vs. subtracting jobs - also registered strong improvement, up to 61.2%.

One item of continuing concern, however, is that real wages still aren't keeping up with inflation. While they were up .2% in December, they were only up 2.1% for the year 2011, over 1% less than the inflation rate.

In summary, so long as you weren't suckered by the ADP report yesterday, this is a very good report. It's just still not good enough to make a significant contribution to an improvement in the trend.

1) The summary states: "Among the marginally attached, there were 945,000 discouraged workers in  December, a decrease of 373,000 from a year earlier."

4) Table A-4 shows big gains in employment for college graduates and some college and the declines for High School grads and less than HS again this month.

First, thanks to NDD for covering this report; my schedule is a bit tight this AM, so I only have time to add a few comments.

1.) As I noted in the review of 2011's employment situation, we've seen job growth for the last 12 months.    The above highlights that fact clearly.  Unfortunately, we haven't had enough job growth, which explains why the long-term unemployment rate is still high.

2.) The lowered readings on labor participation continue to tell a story of the beginning of the boomers retirement; expect this number to stay low for the next decade or so as this trend continues.

3.) Overall -- in conjunction with the lowered initial claims reading of the alst six or so weeks -- this is a very encouraging report.
Posted by New Deal democrat at 8:20:00 AM