Behind the Jobless Recovery

Great piece today in the WSJ on how low interest rates and economic uncertainty are creating an environment that encourages investment over hiring.


In no other U.S. recovery since World War II have companies been simultaneously faster to boost spending on machines and software, while slower to add people to run them.

Part of this is the old story of substituting capital for labor. But a combination of temporary tax breaks that allowed companies in 2011 to write off 100% of investments in the first year and historically low short- and long-term interest rates have pushed that process into overdrive.

Instead of hiring, companies such as Sunny Delight and chain-saw maker Stihl Holding AG are investing in technology or other ways to make existing operations faster and more productive. History suggests that investment that increases productivity eventually will create jobs and raise living standards. The mechanization of the farm and the automation of the factory both raised fears of permanent unemployment that were unrealized, as efficiencies in production of basic commodities created jobs in all sorts of services.

And that is happening more in this recovery than in the recent past. Spending on gear and hiring usually are more synchronized. Since the economy began growing again in 2009, spending on equipment and software has surged 31%, adjusted for inflation. In the postwar period, only in the wake of the 1982 and 1970 recessions has such spending grown faster. Private-sector jobs have grown just 1.4% over the same span. Only recoveries following the 1980 and 2001 recessions saw slower job growth.

Erik Brynjolfsson, a Massachusetts Institute of Technology economist, says companies began stepping up labor-saving investments in the first half of the last decade. The turning point, he says, came during the recession, when companies realized they could do far more than they expected with fewer people.

Even as demand has drifted back, companies are keeping that ball rolling by spending more money on machinery that automate functions. "It's as if the economy had a pent-up potential for labor savings that hadn't been harvested until the recession," says Mr. Brynjolfsson, author of a new book on automation.

The U.S. today is second only to Japan in the use of industrial robots. Orders for new robots were up 41% through September from a year earlier, according to the Robotics Industries Association trade group. That has helped fuel a larger boom in productivity. Output per hour worked in nonfarm businesses has increased 6% during the recovery. Hours worked are up only 1.5%.

This plays into a few themes we've noted here on the Bonddad Blog.

1.) The decrease in manufacturing employment -- which has cratered over the last 10 years -- is partly caused by an increase in automation.  Consider the following two charts: 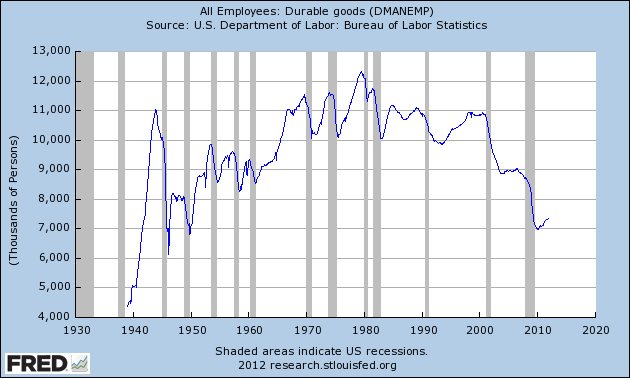 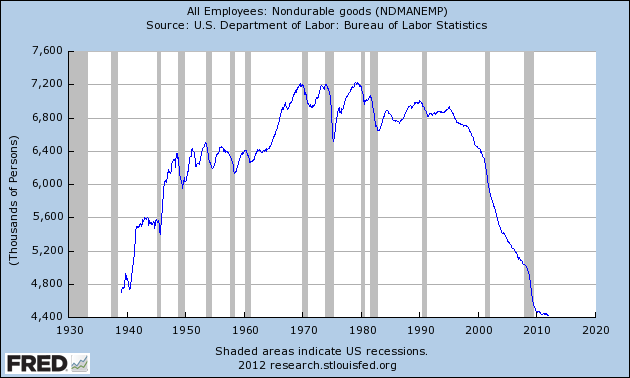 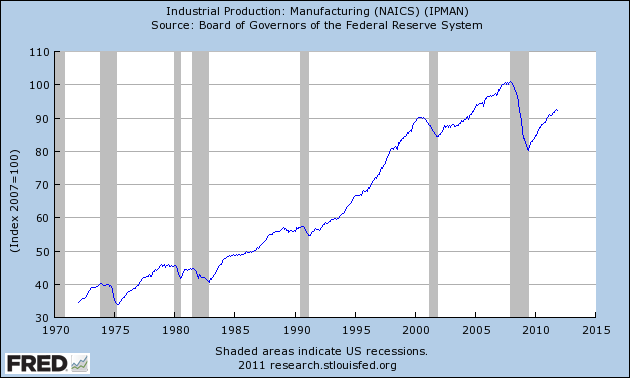 Put another way, the US economy is simply making more with less.

Secondly, there is tremendous investment occurring.  As the article points out, inflation adjusted investment in plant and equipment has increased 31% during this expansion.

I highly recommend the rest of the article.