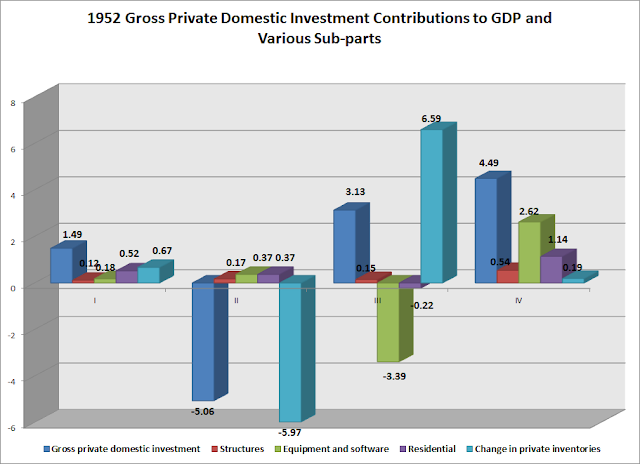 In 1952, we see some pretty wild vacillations in overall gross investment and its contributions to overall GDP.  The first quarter -- which saw GDP increase 4.1% -- saw investment contribute about 36% of overall growth.  The second quarter's figure was incredibly negative which was caused exclusively by a huge contraction in inventory investment.  This was reversed in the third quarter with a move to restock inventories.

Here is how the 1953 Economic Report to the President explained it:


Beginning in the third quarter of 1951, the rate of business inventoiy accumulation declined, as businessmen attempted to bring over-plentiful stocks into line with sales volume. By mid-1952, sellers of such diverse commodities as textiles, apparel, autos, and home appliances appeared to have completed the process of paring down the excess inventories which they had accumulated in the preceding months. Indeed, in some areas retail inventories had probably dipped below the levels required by sales, while business purchasing agents were pursuing a policy of handto- mouth ordering.

During the third quarter, a change became evident as nonfarm inventories were accumulated at an annual rate of 3 billion dollars. Since there was some decline in inventories of steel during this quarter, the rate of accumulation of nonsteel items exceeded 3 billion dollars. Most nondurable goods industries and the nonsteel-using segments of durable goods industries shared in this rise. However, business sales to ultimate consumers did not rise in line with inventories; production and shipment of producers' durables and automobiles fell, largely as a result of the steel strike. But as the final quarter of the year got under way, metal-using firms had already completed in most cases a remarkable recovery. Production and sales of automobiles, appliances, apparel, and almost all types of commodities expanded considerably. At the same time, inventories continued the more rapid climb begun earlier, while government purchases of goods and services rose moderately. 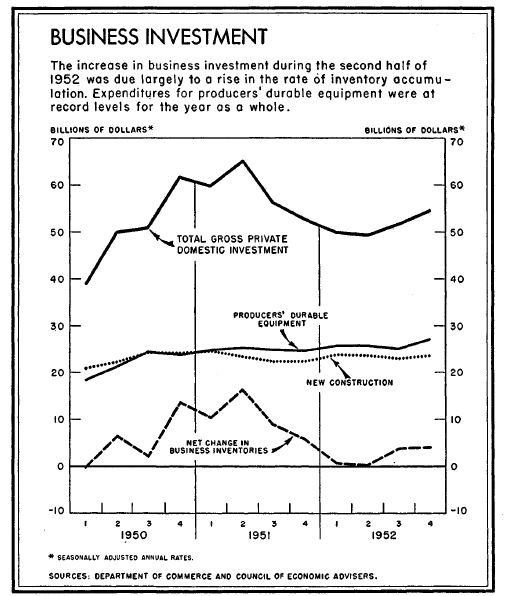 The distortions caused by the inventory situation hide the fact that there was a strong investment environment among manufacturing companies.  This was caused primarily by an accelerated depreciation credit that was passed to encourage investment in defense related industries.  Here's a chart that shows the investment situation: