Last month I discussed house prices with the provocative title It's time to admit that house prices have stopped falling October's data only adds further confirmation to that trend. The Case Shiller 10 and 20 city indexes both remained higher than their March lows. Here is the 20 city index (from March 2009 to emphasize the post-crash results, including the effects of the $8000 housing credit): 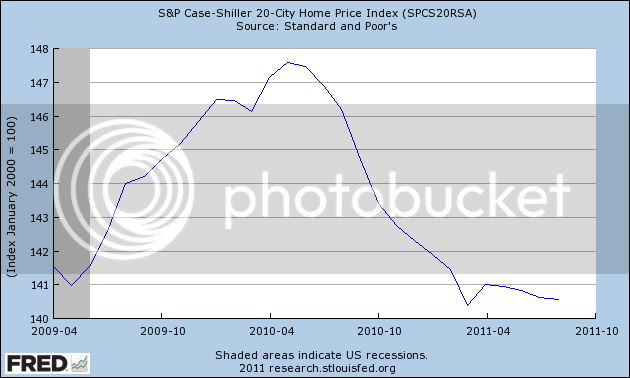 You may notice the "kinks" in the March 2010 and 2011 data. It's possible that there is a slight problem with the seasonal adjustment for that month. Deleting March, here is how the same graph looks: 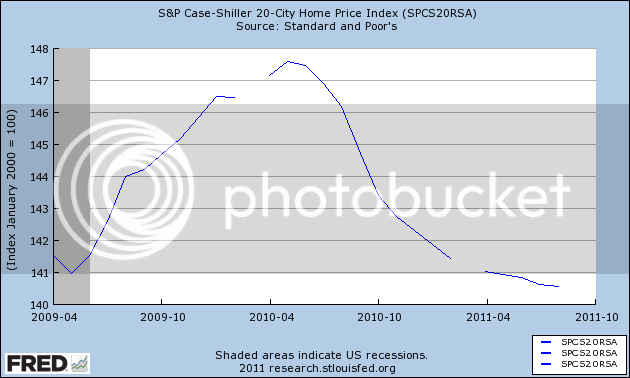 With that adjustment, it looks like the trend is that the fall in prices, while not over, is probably within 1% of its bottom.

Housing Tracker's data for October is in, and it continues to show that the YoY rate of declines has decreased, now only -0.9% YoY. Here's the updated chart: 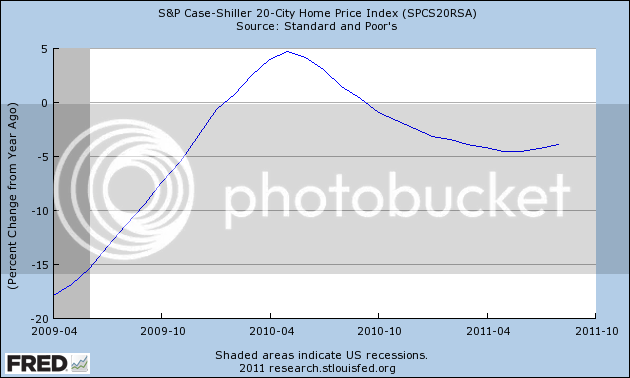 It is important to note that YoY data will not turn positive (or negative) until months after the bottom (or top). For example, nonfarm payrolls bottomed in February 2010. The YoY number did not turn positive until 5 months later, in July. Since Housing Tracker's numbers aren't seasonally adjusted, we have to go with the YoY result, but it is a virtual certainty that at some point in the last 12 months, an actual bottom has already been established.

Why do I track housing prices? In addition to the fact that conventional wisdom, while solidly entrenched, appears to be wrong, it makes a huge difference as to whether any further declines in the housing market are nominal, or only occur after adjusting for inflation (Shiller himself believes another 15% or more decline in real terms is likely, and I do not have any reason to disagree with that).

Sellers who bought a house for $250,000 10 years ago, saw the value increase to $500,000 and then fall all the way back to $250,000 in nominal terms can, even if inflation continues to erode the value of their house by 20% in real terms, still sell their house without bringing cash to the table. On the other hand, sellers whose further depreciation of 20% is nominal (to $200,000), must bring $50,000 to the closing table. You can see that the two scenarios make an enormous difference in the ability of sellers to move, and the likely increase (or not) of foreclosures. 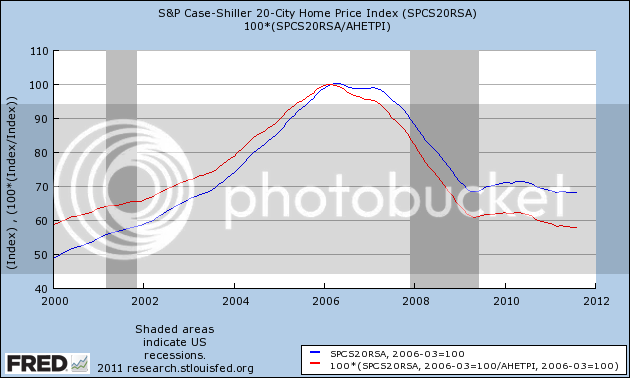 Another 4 years of similar real declines will get us to Shiller's 15%+ number -- without any further nominal decline in prices at all.
Posted by New Deal democrat at 11:30:00 AM