"The PMI registered 50.8 percent, a decrease of 0.8 percentage point from September's reading of 51.6 percent, indicating expansion in the manufacturing sector for the 27th consecutive month. The New Orders Index increased 2.8 percentage points from September to 52.4 percent, indicating a return to growth after three months of contraction. The Prices Index, at 41 percent, dropped 15 percentage points, and is below the 50 percent mark for the first time since May 2009 when it registered 43.5 percent. Inventories decreased to 46.7 percent, which is 5.3 percentage points below the September reading of 52 percent. Comments from respondents are mixed, indicating positive relief from raw materials pricing and continuing strength in a few industries, but there is also more concern and caution about growth in this uncertain economy."

Here's a graph of the composite index 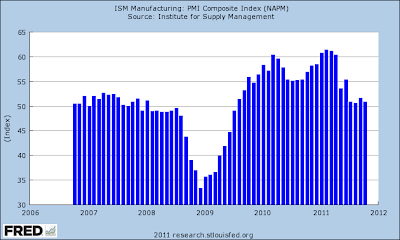 While the index took a large dive earlier this year, it has remained positive, although just slightly so for the entire year.
The anecdotal information tells the following stories

1.) Input prices are decreasing
2.) Uncertainty is increasing
3.) Demand is dropping, but not crashing.

There were a few other good points in the report

Let's turn to the services number


"The NMI registered 52.9 percent in October, 0.1 percentage point lower than the 53 percent registered in September, and indicating continued growth at a slightly slower rate in the non-manufacturing sector. The Non-Manufacturing Business Activity Index decreased 3.3 percentage points to 53.8 percent, reflecting growth for the 27th consecutive month. The New Orders Index decreased by 4.1 percentage points to 52.4 percent. The Employment Index increased 4.6 percentage points to 53.3 percent, indicating growth in employment after one month of contraction. The Prices Index decreased 4.8 percentage points to 57.1 percent, indicating prices increased at a slower rate in October when compared to September. According to the NMI, eight non-manufacturing industries reported growth in October. Even though there is month-over-month growth in the Employment Index, respondents are still expressing concern over available labor resources and job growth. The continued strong push for inventory reduction by supply management professionals has resulted in contraction in the Inventories Index for the first time in eight months. Respondents' comments are mixed and reflect concern about future business conditions."

Here's the chart of the composite index: 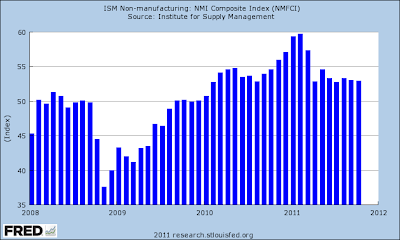 The index has been in the same place for the last seven months.