All twelve Districts reported that real estate and construction activity was little changed on balance from the prior report. Residential construction remained at low levels, particularly for single-family homes. That said, Philadelphia, Cleveland, and Minneapolis noted small increases in single-family construction, and construction of multifamily dwellings continued to increase at a moderate pace in Boston, Philadelphia, Cleveland, Kansas City, Dallas, and San Francisco. Home sales remained weak overall, and home prices were reported to be either flat or declining across all of the Districts. In contrast, rental demand continued to rise in a number of Districts. Commercial real estate conditions remained weak overall, although commercial construction increased at a slow pace in most Districts. Boston, Philadelphia, St. Louis and Cleveland cited some gains in demand for construction of education, healthcare, and institutional-related buildings, and New York reported an increase in hotel development. Furthermore, Philadelphia, Cleveland, and Chicago noted an increase in demand for manufacturing and distribution facilities. Vacancy rates remained elevated, but Boston, Atlanta, Chicago, Minneapolis and Dallas reported an increase in leasing activity and Philadelphia and San Francisco indicated rising investor interest in well-leased office space.

Nothing of a surprise here; real estate is still in terrible shape.  The good news is that it can't fall much further, which, in my opinion, seriously prevents another serious economic contraction.

All of the charts below are from the website Calculated Risk. 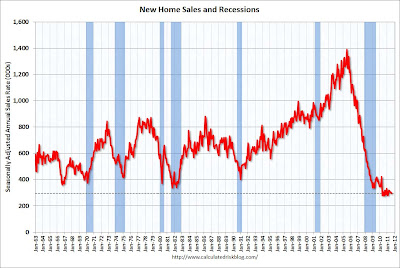 The overall pace of new home sales is still near multi-decade lows. 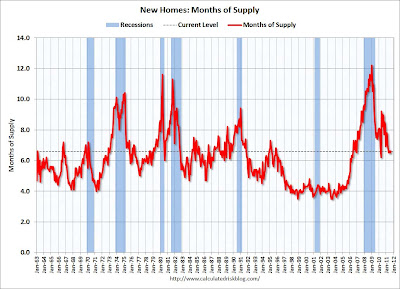 However, the months of available supply appears to be in line with historical norms. 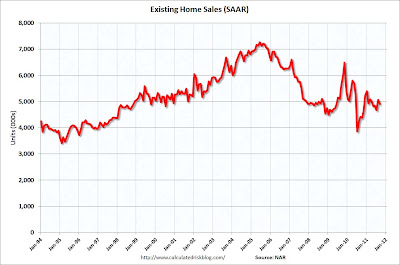 The pace of existing home sales is still centered around the 5 million/year figrure, where, despite the distortions caused by the housing credit issue, it's been for the last years. 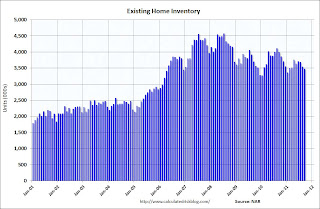 The number of existing homes on the market is still elevated, but it has been slowly moving lower over the past few years.

Real estate is still in a terrible place.  However, it can't get much worse, which is actually good news.