Reports regarding nonfinancial services were mixed in September. Richmond noted slower overall activity, and St. Louis cited reduced demand for telecommunications, media, and education services. Demand for accounting and legal services was reported to have been unchanged in both Dallas and San Francisco. On the positive side, contacts in St. Louis reported that demand for business support services increased, and Boston reported strong business conditions for economic consulting firms involved with litigation work and advertising firms helping to market financial services. In addition, San Francisco noted continued growth in demand for technology services, Minneapolis noted an increase in activity in software and engineering, and Philadelphia cited some growth in logistics. Staffing at nonfinancial service-sector firms was reported to have been up slightly in Richmond, but growth slowed in Chicago and Philadelphia reported flat activity.

Like the manufacturing report, this seems to be a "two steps forward, one step back" summation.  Growth appeared to be reported in a small majority of districts, but the negative news weighed down the positive advances.

Let's take a look at the latest ISM index to corroborate some of the above data:

Overall, the area is still just above the 50 line between growth and contraction.  New orders are up, but employment is down.
The overall tone of the anecdotal information from the report is one of a weakening outlook.  Lack of confidence on the part of both consumers and business is lowering current and future sentiment.  No one has any faith that things are going to get better in the near future. 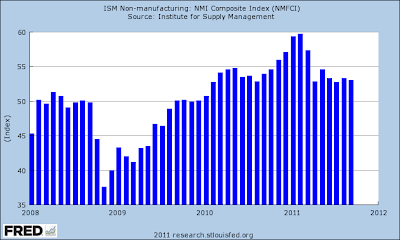 The composite index has been hovering above 50 for the last 6 months, indicating this area of the economy is still expanding. 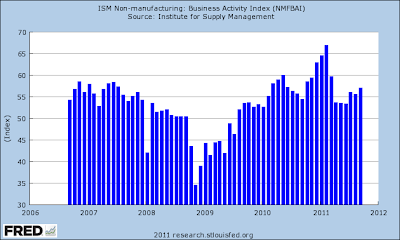 The business activity index is still above 50, and has risen a bit over the last three months. 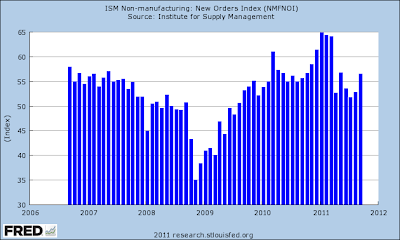 New orders were fluctuating over 50 for the last three months, but last month they took a solid pop higher.  However, new orders did the same thing a few months back, only to fall back to lower levels. 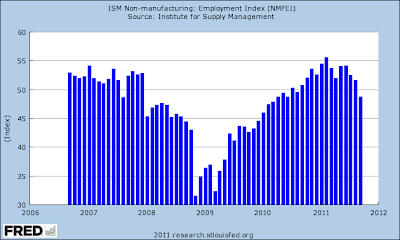 The employment index has been dropping for the last three months and last month moved below 50 -- a sign of contraction.

The service sector appears to be in a slowdown phase, largely caused by lowered confidence and lack of economic visibility.