Contacts indicated that manufacturing and transportation activity increased since the last report in most Districts. A large number of Districts reported higher production of autos and other transportation-related equipment. Cleveland, Atlanta, and Chicago noted increases in auto production, and Boston, Richmond, Chicago, and St. Louis all cited robust activity for auto suppliers. Dallas reported healthy demand for nondefense transportation goods. Boston, Richmond, Kansas City, and San Francisco indicated continued growth in commercial aviation and aerospace manufacturing. Steel production rose in Cleveland and Chicago, and in a number of Districts metal manufacturers' new orders also rose. Other areas of manufacturing were more mixed. The Dallas report noted a decline in refining activity. However, both Dallas and Atlanta continued to note robust oil and gas drilling activity, and this activity was said to be propelling demand for related equipment from suppliers in Chicago. Manufacturing of construction materials or equipment was reported to have increased some in Philadelphia, Chicago, and Dallas but remained weak in most other Districts. Growth in high-tech manufacturing continued to be robust in Boston, but moderated in Dallas and San Francisco. Respondents reported that food production was up in Chicago, Minneapolis, and San Francisco, steady in Dallas, and lower in Boston. Manufacturers of consumer products reported a softening in orders in Richmond, Chicago, and Dallas, while new orders for apparel increased in San Francisco.

To get more detail, let's first look at the latest ISM manufacturing report:


"The PMI registered 51.6 percent, an increase of 1 percentage point from August, indicating expansion in the manufacturing sector for the 26th consecutive month, at a slightly higher rate. The Production Index registered 51.2 percent, indicating a return to growth after contracting in August for the first time since May of 2009. The New Orders Index remained unchanged from August at 49.6 percent, indicating contraction for the third consecutive month. The Backlog of Orders Index decreased 4.5 percentage points to 41.5 percent, contracting for the fourth consecutive month and reaching its lowest level since April 2009, when it registered 40.5 percent. Comments from respondents generally reflect concern over the sluggish economy, political and policy uncertainty in Washington, and forecasts of ongoing high unemployment that will continue to put pressure on demand for manufactured products." 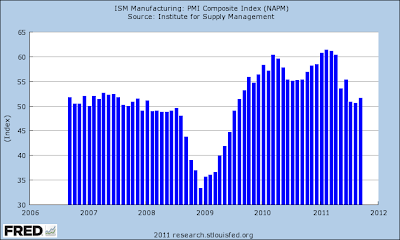 The overall composite index shows a drop in activity over the last 5 months.  But, note that overall activity has remained slightly positive. 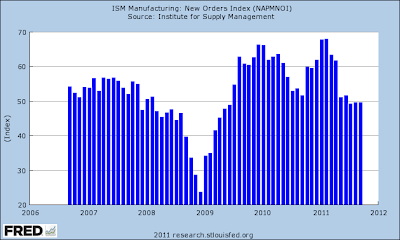 The new orders index has been just slightly negative for the last three months, while 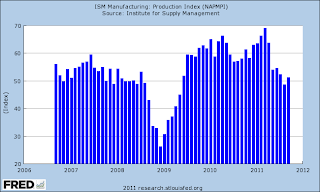 The anecdotal component of the latest report had the following observations


"The economy continues to be a drag on our business outlook. We are trying to deal with new and additional FDA regulations which are costing significant dollars. It is hard to recoup any of these additional costs in our pricing levels without losing significant sales volumes." (Chemical Products)

"Global demand for semiconductors is down and maybe not yet 'bottomed out.' Inventory reduction activities are a priority." (Computer & Electronic Products)

"Japan supply chain issues are over, but exchange rates and raw material prices are hurting our profit." (Transportation Equipment)

"We sense a weakening in demand, but it is not extreme at this point." (Plastics & Rubber Products)

"Overall, business is improving with a measurable uptick in orders this month. Part of that is due to pre-holiday season orders." (Miscellaneous Manufacturing)

The overall tone of the comments is quite mixed. 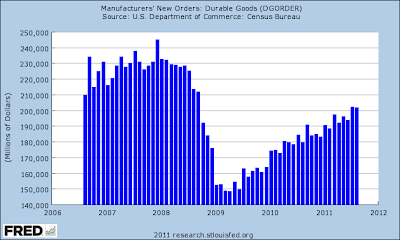 Durable goods new orders continue to move higher, but they are still below the highs established in the previous expansion.  Over the last few months, I've expressed concern about this number, largely because of the stalling that occurred 6 months ago.  While that stalling is now over, I would still like to see more strength in this numbers series.

Let's move on to some of the regional indicators:


The Empire State Manufacturing Survey indicates that conditions for New York manufacturers continued to deteriorate in October. The general business conditions index remained negative and, at -8.5, was little changed. The new orders index hovered around zero, indicating that orders were flat, while the shipments index rose above zero to 5.3. The inventories index stayed below zero, a sign that inventories declined. The indexes for both prices paid and prices received fell, but remained positive, suggesting that price increases moderated. The index for number of employees rose several points but was at a relatively low level of 3.4, while the average workweek index was negative for a fifth consecutive month. The future general business conditions index dropped six points to 6.7, its lowest level since early 2009, while future indexes for prices paid and prices received declined.

This index has been right below 0 for the last three months, indicating slight contraction.  The good news is that it hasn't contracted any more sharply, but the bad news is it's still negative.


The survey’s broadest measure of manufacturing conditions, the diffusion index of current activity, increased from -17.5 in September to 8.7, the first positive reading in three months (see Chart). The current new orders index paralleled the rise in the general activity index, increasing 19 points and returning to positive territory. The shipments index also recorded a positive reading, increasing from -22.8 in September to 13.6 this month.Labor market conditions improved only slightly this month.

Nearly 18 percent of the firms reported an increase in employment, but 17 percent reported a decrease. The current employment index remained slightly positive but decreased 4 points from its reading in September. The average workweek index increased notably from -13.7 to 3.1. However, the percentage of firms reporting a longer workweek (15 percent) was only slightly greater than the percentage reporting a shorter one (12 percent).

This number had a nice pop the last month, pulling it into decently positive territory.

Most other indicators also suggested more moderate weakness. The index for capacity utilization picked up three points to −11 and the backlogs of orders edged up two points to finish at −23. Additionally, the delivery times index added two points to end at −2, while our gauges for inventories were mixed in September. The raw materials inventories index was virtually unchanged at 18, while the finished goods inventory index gained five points to end at 22

These results are very similar to those for the Empire State survey; they are weaker, but slightly so.


The month-over-month composite index was 6 in September, up from 3 in August and 3 in July (Tables 1 & 2, Chart). The composite index is anaverage of the production, new orders, employment, supplier delivery time, and raw materials inventory indexes. The increase was mainly
concentrated in durable goods plants, particularly for aircraft and computer equipment, while nondurable goods producers reported a continuedslowing in activity.

Most other month-over-month indexes also improved modestly in September. The production index rose from -2 to 3, and the shipments, new orders, and order backlog indexes also edged up. The employment index increased for the second straight month, but the new orders for exports index fell slightly after rising last month. Both inventory indexes increased somewhat.

These were slightly positive, but just barely so.

And finally, the Texas index saw a slight increase:


Texas factory activity increased in September, according to business executives responding to the Texas Manufacturing Outlook Survey. The production index, a key measure of state manufacturing conditions, rose from 1.1 to 5.9, suggesting growth picked up this month after stalling in August.

Most other measures of current manufacturing conditions also indicated growth in September. The new orders index edged down from 4.8 to 3.6 this month, suggesting order volumes continued to increase, but at a slightly decelerated pace. The shipments index rose from 6.7 to 9.4, reaching its highest level since March. The capacity utilization index remained in negative territory in September but rose from –2.8 to –1.3.

Perceptions of general business conditions worsened in September. The general business activity index remained negative for the fifth month in a row and fell from –11.4 to –14.4; 10 percent of manufacturers perceived an increase in activity this month, while one quarter noted a decrease. The company outlook index fell from 7.2 in August to a near-zero reading in September. Still, the great majority of respondents said their outlooks were unchanged or improved from last month.

The overall tenor of the manufacturing sector is one of slight strength or slight weakness, but essentially one where overall activity is fluctuating right around the "0" line.