Housing and the double-dip

Suppose my analysis is wrong, and we actually have a "double-dip" recession? How bad is it likely to be?

I wanted to put up a much longer discussion on this, but frankly I don't have the time right now. One important point, however, is to look at housing. Housing historically has been a long leading indicator ( 6 to 12 or even 15 months ahead of the economy as a whole). Bill McBride a/k/a Calculated Risk has pointed out a number of times that he did not expect the unemployment rate to drop that much, because it correlates quite well with housing starts - with a lag - and housing starts have gone more or less sideways for two years. The relationship going back 50 years is shown in this graph: 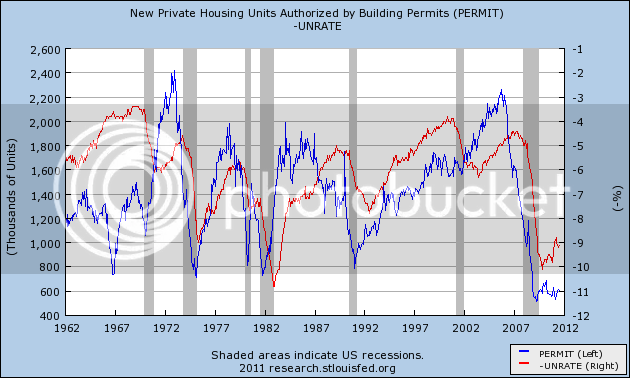 As I have previously pointed out, housing starts also correlated very well with job growth in the 1920s and 1930s as well. But if the correlation holds true, than the inverse also holds true also. That is, if housing starts have not declined, then we should not expect the unemployment rate to grow very much in any double-dip, either. A ceiling of about 10% or so in the next 6 - 12 months on the unemployment rate based on housing present status is certainly a valid estimate.

And the housing market shows no sign of any meaningful accelerated downturn. To the contrary, new home sales data for July showed that the months of supply of houses on the market has dropped to 6.6 months. With the exception of a very brief period during the artificial support to housing of the $8000 tax credit, this is the lowest months' of housing for sale since the onset of the recession almost 4 years ago: 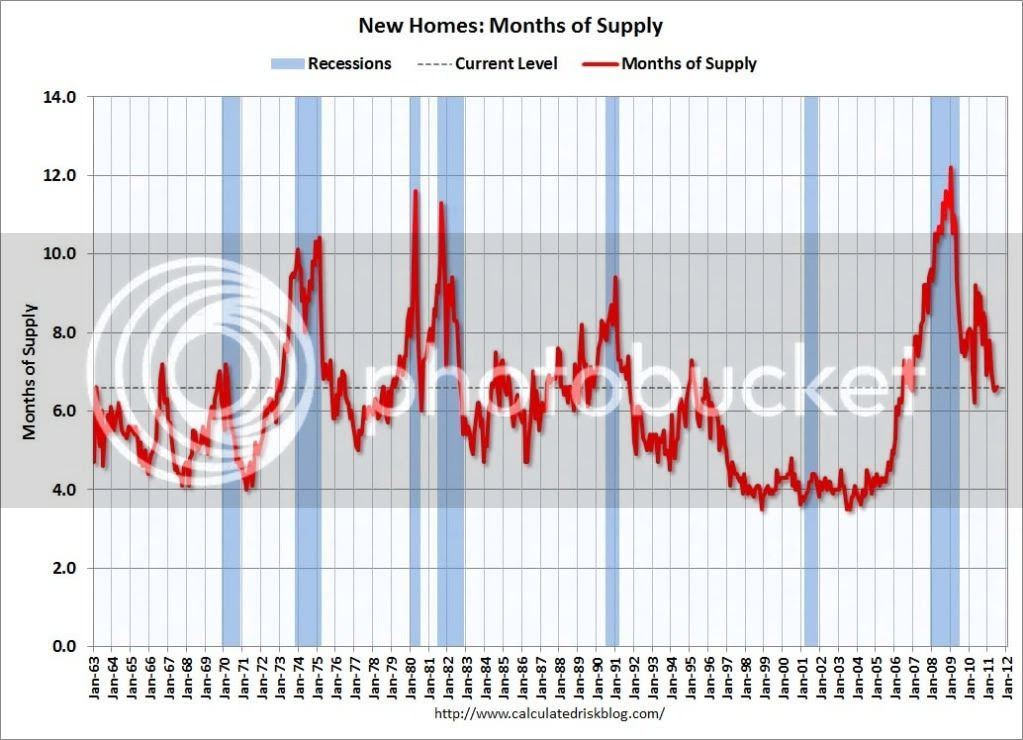 With no further goverment stimulus at all, this metric has declined by 2.5 months during the last year. It is not unreasonable at all to believe it could drop below the long-term average of 6.0 months during the next year.

This week Housing Tracker reported that YoY asking prices are only down -2.3%. One quarter of all metro areas tracked are now reporting YoY increases in asking prices.

In my opinion the bottom in nominal housing prices (as opposed to inflation-adjusted prices) is much closer than almost all analysts suspect. Once we start to get an upward trend in housing, then according to the correlation with the unemployment rate, there should be good fundamental support for job growth. Housing simply does not support a substantial double-dip.