Fundamentally, we're at the end of the summer driving season when US demand spikes upward. In addition, there is concern about the pace of economic expansion in the rest of the developing world, leading to less upward pressure on prices. There is also now a tremendous amount of upward resistance to price advances. There is little reason to see oil moving meaningfully higher in the current environment.

In short, prices had sold off and, at best, were consolidating at low levels, facing tremendous upside resistance. In such an environment -- barring some fundamental change in the overall economic picture -- there is little reason to see any change; that is, prices are low and there is no reason to see major movers higher. 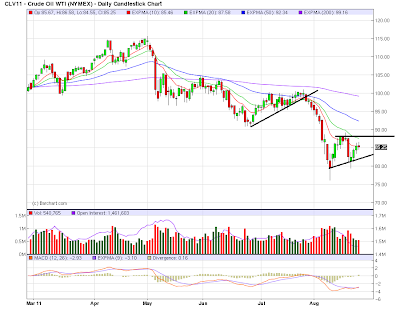 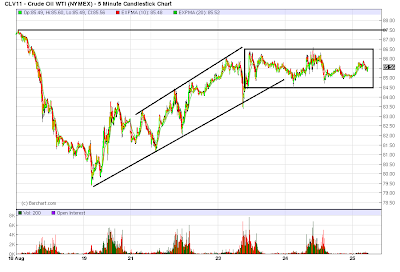 The 5 minute chart shows prices rising in an upward sloping channel last week, starting at the 79.5 level and topping out at the 86.5 level, where they then moved sideways between 84.5 and 86.5. There is also upside resistance at the 87.5 level -- and that's before we get into issue of hitting the daily EMAs.

Prices are now under tremendous downward pressure es evidenced by the EMA picture. In addition, there is concern about overall US demand destruction in a weakening economy, along with the possibility of a slowing Asian market. In short, should oil prices start to move higher, there will be a large amount of resistance from both the fundamental and technical side.