While energy prices get all the headlines, food inflation does not. I don't know why that is, but it does seem to be the way of things. Today I wanted to break down food prices in more detail, because, as I noted yesterday, food prices are spiking and are probably crimping consumer spending to some degree.

First, let's review the big chart of the series: 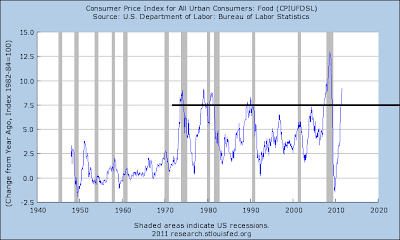 As I observed yesterday, prices are now above a YOY percentage change of 7.5% -- a level that has traditionally indicated we're about the enter a recession. While the recent spike could be attributed to the previous decrease -- that is, because prices are rising from an incredibly low level, the percentage change is that much more pronounced -- the spike is still concerning.

Let's look at the individual components of the food at home category. 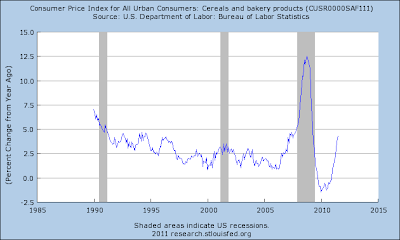 The cereals and baking goods chart shows the pronounced effect of the pre-recession food price spikes, along with the impact of rising grains prices. Remember that while grains have been moving sideways for some time, they are all still at high levels. Those prices are being reflected in the current price index of cereals. 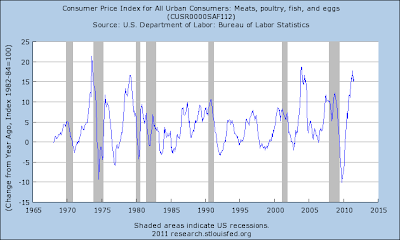 The meat index also shows large YOY spikes, largely because of the drought in Texas and Oklahoma thinning herds and the spiking cost of grains, which are fed to cattle. The recent spike is very large and therefore very noticeable to people. 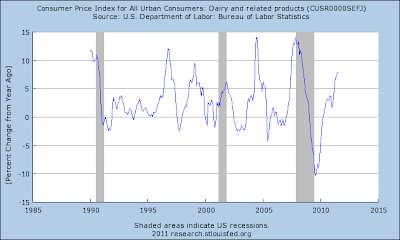 Dairy prices are also spiking, but not to the level of previous spikes, such as the two that occurred during the previous expansion. 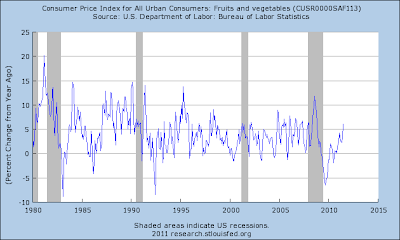 Fruit and vegetable prices are at the top of s standard pricing pattern. 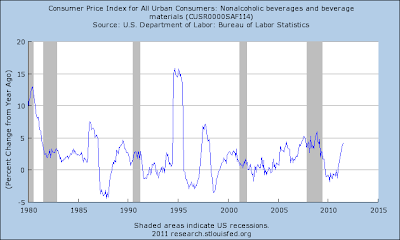 Non-alcoholic beverages are also increasing at fairy high rates -- which I have noticed in my 20 ounce diet Dr. Pepper purchases.

At the heart of the current price spikes are grain prices; they form the basis of cereal and grain prices, but also have an important impact on meat and dairy prices as grains are used in feed. To that end, consider these two charts of wheat and corn prices, both of which are 25 years in length. 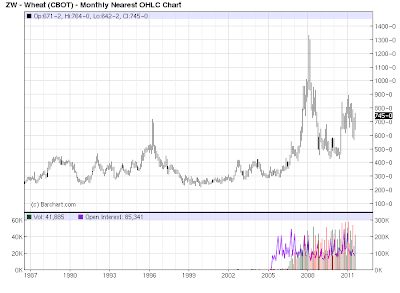 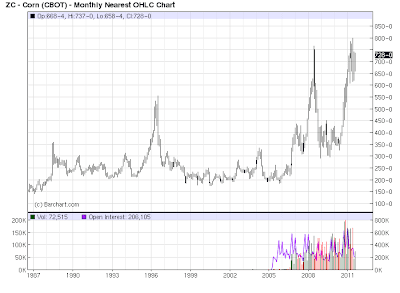 Wheat saw massive spikes at the end of the last expansion, and is still at high levels, while corn is near its highest level in 25 years. As these two grains form the building blocks of out food system, these price spikes have very important ripple effects.

At the heart of the above charts is the long-term impact of two events.

1.) Using your food supply for fuel, thereby increasing overall demand.
2.) The drop in the dollar.

The former can be considered a pure political boondoggle while the latter indicates the need to move away from a single currency pricing of commodities and more towards a basket of commodities.