Last month, when the consensus was for a payrolls gain of about +150,000, I said to expect a report more like +50,000. I based this on the difference between how payrolls behave in the face of rising initial jobless claims vs. falling claims. For your reference, here is the scatter graph I ran last month comparing initial jobless claims vs. nonfarm payrolls, which includes the deterioration in jobs leading up to and into the recession in red vs. the improvement during the recovery in blue: 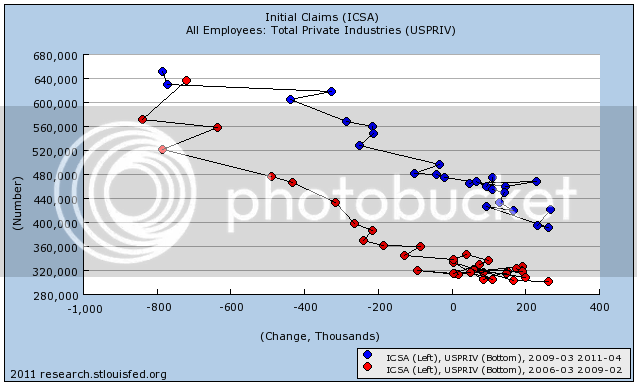 It simply makes a world of difference whether you are deteriorating into recession, or in recovery coming out of recession, leading to very different scatterplots as above (the same pattern is true for every other postwar recession).

As I have previously noted, we only have one true example of a double-dip, and that is the failed 1980 recovery turning into the 1981-82 recession. Here is the scatter graph for that double dip, showing the abortive recovery (blue) and the double-dip (red): Given the continuing initial claims in the 410,000 - 430,000 range, the poorer (red) trend on the scatterplot graphs is the one we should be referencing. More accurately, while we don't know what a new "red line" might be developing, it is almost certain to be to the left of the recent recovery "blue" line. Even with the "summer stall" last year, where GDP only fell to +1.7%, nonfarm payrolls fell into and remained in 5-digit territory.

Predicting the nonfarm payrolls number is admittedly a mug's game - there is variability of something like +/-125,000 around any estimate. This month the consensus is still for +110,000 private payrolls, and +80,000 total (meaning 30,000 lost government jobs). Unlike last month, both of these estimates look to be "in the ballpark." At the same time, a number similar to last month's looks more likely to me, and a larger loss of government jobs (which has happened in both June 2009 and June 2010). Let me put it this way: the range of reason includes a negative overall number for the first time in over a year.
Posted by New Deal democrat at 11:00:00 AM