My long-term prediction for oil is for prices to again move higher and stay there because of the macro level supply/demand situation (see the link above for the charts). However, right now the chart has to move through a fair amount of technical resistance. Prices have to advance through the EMAs and several resistance levels. I would give prices through July or mid-August to accomplish that feat before moving into higher territory.

At the heart of my analysis is this basic situation:

The oil market is caught between two different issues. In the short-term, there is concern about the pace of expansion. Lower growth = lower oil demand = lower prices. However, as I pointed out above, there has been a strong, fundamental, long-term shift in the world's oil demand as countries like India and China have grown with their demand supplementing US/EU demand, providing a long-term floor under prices. But currently, these countries are also tying to slow growth due to increased inflationary pressures within their respective countries. In other words, there is currently a great deal of negative sentiment weighing down oil prices.

Simply put, there is tremendous amount of pressure on oil prices to move higher, with little to no reason for them to move lower. As such, arguing for higher oil prices is a no brainer.

Let's take a look at the chart: 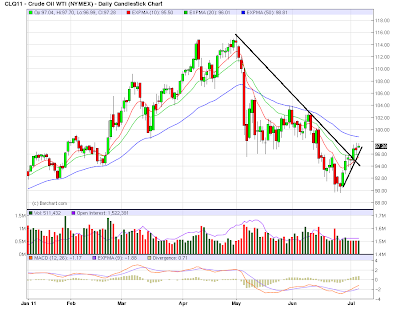 Prices have sold-off for several reasons. First, the IEA coordinated a massive release of oil to offset lost production due to the Libya situation. In addition, for the last month there has been concern about the pace of economic recovery, leading traders to sell net long positions. However, we are now right in the middle of the summer driving season which will add upward pressure to prices. Additionally, nothing has changed in the supply and demand situation to warrant a change in the overall outlook.

As I wrote last week, moving through this many layers of technical resistance takes time. I gave it about a month, which I still think seems like an adequate amount of time make this move. As such, I still see prices moving higher for the summer and for prices to be back over $100 within a month.
Posted by Unknown at 6:26:00 AM