The yield curve and pre-WW2 recessions

This continues my look at leading indicators as they may apply to pre-WW2 deflationary recessions. I have already looked at BAA bonds, housing starts, commodity prices, and the stock market. Today I will look at the yield curve.

Since 1960, the yield curve, in conjunction with "real M1," accurately foretold 8 of 8 recessions with no false positives. This is the "Kasriel Recession Warning Indicator" (named for Paul Kasriel of the Northern Trust Company). This indicator has also worked in reverse. If both the yield curve and real M1 were positive, the economy was expanding.

Two and a half years ago, I wrote a 5 part series, Economic Indicators during the Roaring Twenties and Great Depression, to see how well the Kasriel indicator worked before 1960. This series was sparked in large part by the most unnerving economic graph I've ever seen, from Ned Davis Research, the most relevant part of which is reproduced below: 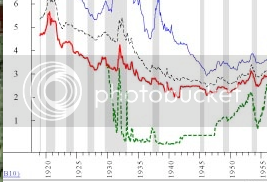 In this graph, Fed Funds rates (pre-1935 rates are from the NY Fed) are in green, and long term government bond rates are in red (you can ignore the other two). As you can see, for virtually the entire period beginning in late 1929 and continuing right through the Great Depression and into the 1950s, the yield curve was resolutely positive. And yet that period coincided with the two worst downturns in the last 100 years, as well as three other recessions.

With help from a paper by a fellow named Ben Bernanke, I was able to reproduce graphs of long term interest rates (green), the fed funds rate (blue), and the CPI (red). Here they are for the 1920's: 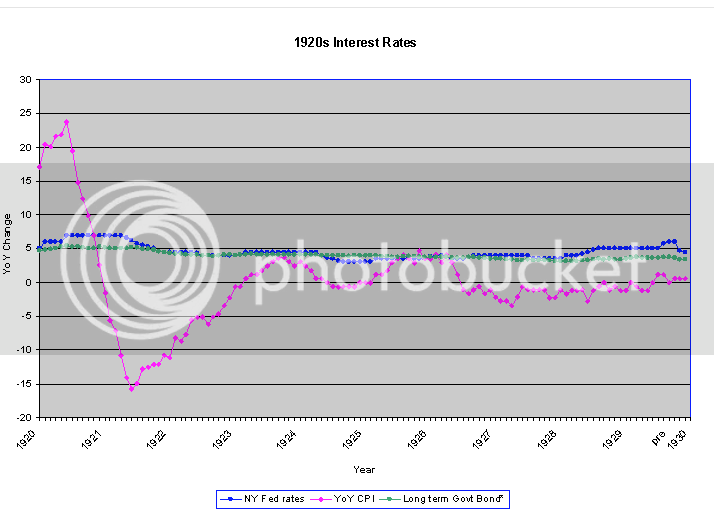 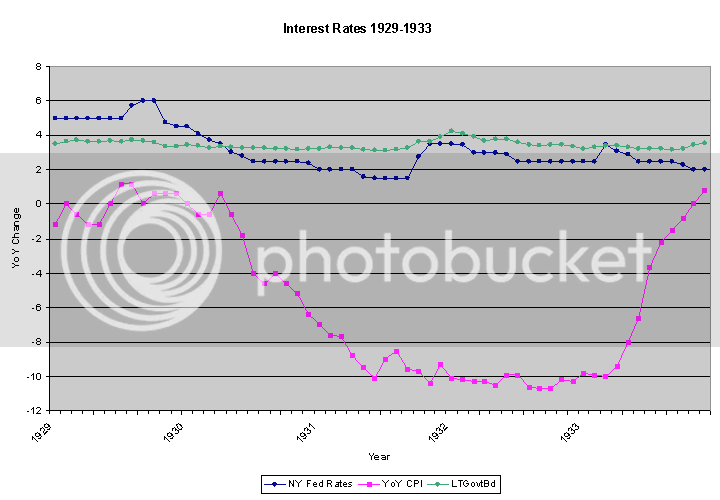 The result is, the yield curve inverted and accurately signaled the inflationary recession of 1920-21, the 1926 recession, and the onset of the 1929 "great contraction," but utterly failed to forecast its continuation, or the 1938 recession, or the two immediate post-WW2 recessions.

Of particular note, from early 1928 until late 1929, the yield curve was inverted. In fact, during 1929, with fed interest rates 6% over the CPI, the inverted yield curve (with long term bonds ~1.5%-2.5% under short term rates), was the most serious inversion until 1981 when Paul Volker killed inflation by raising interest rates some 9% over the inflation rate.