A Closer Look at Employment, Pt. III (Or, The Drop in Government Jobs is a Big Problem)

Given the miserable jobs report from Friday, let's delve into the data to see what exactly is happening with employment. 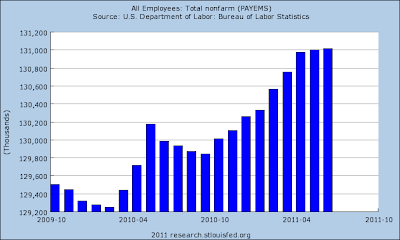 The chart above shows a close up of total non-farm job growth. Eyeballing this chart, we see growth, but growth that is hardly linear. Notice that at the beginning of 2010 we see strong job growth (remember this is around the peak census hiring time), which then dropped until near the end of 2010. Since the beginning of the year, we've had decent job growth which has leveled out the last three months. 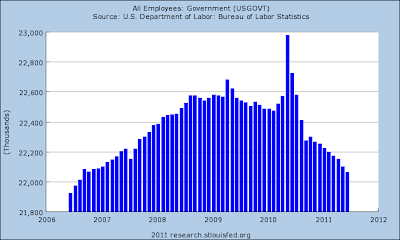 Notice the continued drop in government employees, which has acted as a drag on overall job growth for the last few years.

Dealing with the government jobs number is a bit tricky, because we have to account for two spikes with the first being census workers. So, I'm going to do a simple, back of the envelope calculation which should get us in the ballpark. In February, 2010 there were 24,474,000 government employees, which increased to 22,980,000 in May, for an increase of 506,000. For the sake of argument (and simplicity) I'm going to assume this increase was composed entirely of temporary census employees. In addition, there was a spike in government employees to 22,681,000 in April 2009 that quickly moved lower, indicating the spike was temporary. I'm going to take these bumps out of the equation as well.

All that being said, the maximum number of government employees in the last 7 years occured in January 2009 where there were 22,582,000 employees. Currently, there are 22,064,000 for a decrease of 518,000. In other words, as the the number of non-farm payroll jobs has been increasing for the last 6-7 quarters, the drop in government employment has been a net overall drag on the employment figures and probably provides a partial explanation for initial unemployment claims remaining over 400,000 this far into the recovery.
Posted by Unknown at 8:30:00 AM