A Closer Look At Employment Part I; How Did We Get Here and Where Are We?

In light of Friday's breathtakingly bad employment report, this week I'm going to take an in-depth look at the employment situation. So let's start with an explanation of how we got here. 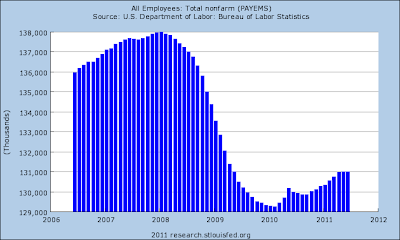 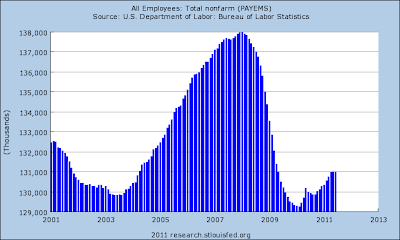 The above chart shows the same series, but goes back to 2001. The point of the above chart is to illustrate that the job losses during the great recession completely wiped out all job gains of the last 10 years. In other words, this was akin to a natural disaster that wipes out an entire city, meaning rebuilding takes a tremendous amount of time and effort. 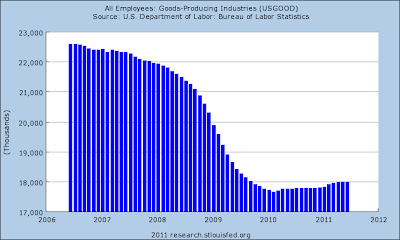 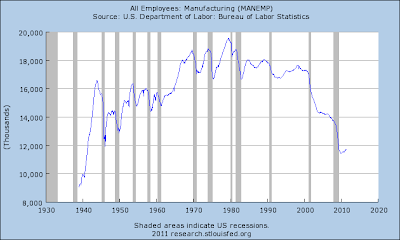 For the last 10 years, we've seen large drops in US manufacturing employment. Part of the reason is the increased use of automation -- which is a natural by-product of technological development. As for offshoring, most offshoring is not bad. Remember that other markets have been developing for the last 20+ years and are now to the point (and have been for at least 10 years) where locating facilities in those countries makes practical sense. For example -- Brazil, India, China and Russia are all emerging economies with growing manufacturing and consumer markets. Locating manufacturing facilities in these countries (at the expense of US production) cuts down on transportation costs and creates new profit centers and local goodwill for parent companies. In short, loss of US manufacturing jobs represents as much an overall realignment of global manufacturing, consumption and economic patterns as it does an "evil plot by those nasty capitalists." Most importantly, this also means the manufacturing jobs lost will not be coming back.

As for service sector jobs lost (about 4 million), let's assume that 20% were real estate related. This really isn't so hard to imagine when you consider real estate agents, mortgage brokers, building inspectors, financial jobs etc.. related to the industry. That means an additional 800,000 jobs were real estate based -- which means they're not coming back anytime soon either.

So, goods producing industry losses (about 4.417 million jobs) have the extreme misfortune of being the victim of the housing bust -- which means there will not be a quick rebound from the massive losses in construction employment -- while a fundamental change in technology (increased automation) and a fundamental realignment of global consumption and economic centers of influence has led to a drop in manufacturing employment -- which means most of the job losses in that area won't come back either. As for service sector employment, a back of the envelope calculation about the effects of the housing bubble and bust indicates that about 800,000 jobs were lost from over reliance on a single sector of the economy for growth.

In other words, the slow pace of job creation in the current environment is as much the result of macro-economic issues -- such as the long-term effects of the bursting housing bubble and the lower importance of the US market relative to international markets -- as anything else.
Posted by Unknown at 2:30:00 PM