A Closer Look At Employment, Part IV: Length of Unemployment

Let's continue looking at the unemployment situation by looking at the length of unemployment. Think of this as a series; first an individual is unemployed for less than 5 weeks, than 5-14 weeks, etc. Also note that these series act like a wave, with the five weeks numbers rolling over into the next time category, etc... 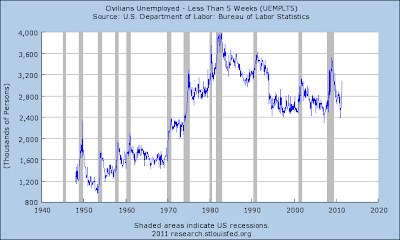 Note that the number of individuals unemployed for less than five weeks was actually at a good level -- it reached the lower level of the range established in the 1990s and 2000s. However, this number has spiked up over the last few weeks to levels that raise concern. 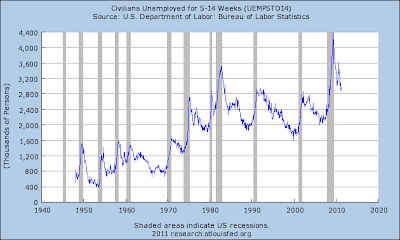 The number of individuals unemployed for 5-14 weeks -- while still at high levels -- has been moving in the right direction. I would expect this number to spike up over the next few reports as a result of the less then five weeks' numbers increase. 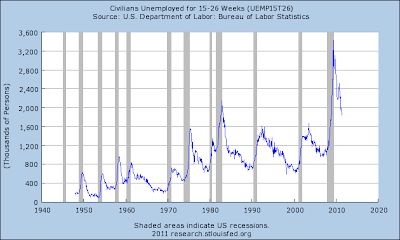 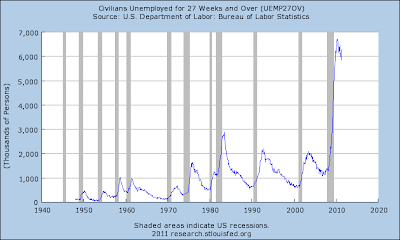 The long-term unemployed number is still far too high and most disturbingly has not made any meaningful decrease.

The above charts indicate that the initial damage of the recession -- the massive job losses that occurred in the 2008-2009 period -- has not been restored. However, the decreases in the intermediate ranges of unemployment are encouraging and indicate some further damage has occurred, but nowhere near the magnitude of the original job losses. However, the recent spike in the less than 5 week number is very concerning, as it indicates a new wave of people may be starting to hit the ranks of the unemployed.

Also to consider, is that the intermediate numbers have declined as people have left the labor force, largely to take early retirement. I outlined my thoughts on that argument in this post.
Posted by Unknown at 8:30:00 AM