As I wrote last week, moving through this many layers of technical resistance takes time. I gave it about a month, which I still think seems like an adequate amount of time make this move. As such, I still see prices moving higher for the summer and for prices to be back over $100 within a month.

It is my belief that the number of new oil consumers (India and China) are forming an increased demand for oil which is replacing diminished US demand. As such, I think there is a floor underneath oil prices. Let's take a look at the charts. 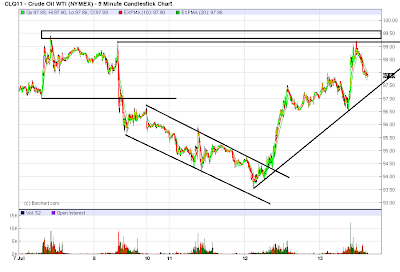 On the five minute chart, prices broke through support four days ago and moved lower for two days largely as a result of the EU/Greece and Italy situation. But prices have rebounded over the last two days and are hitting resistance in the 99/99.5 price area. 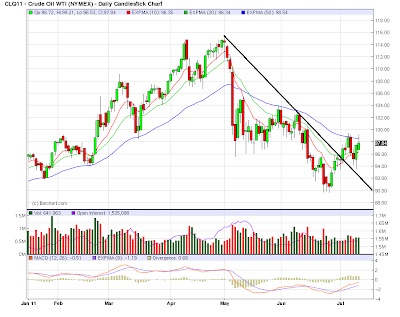 Prices have moved through resistance, but are now mired with the EMAs. Prices have hit upside resistance at the 50 day EMA twice now. Note the 10 and 20 day EMAs are now moving higher and the 10 has just crossed over the 20. The MACD has given a buy signal as well.

Overall, prices are moving about how I thought they would after the sell-off. Remember -- there is a tremendous amount of resistance to move through right now which takes time. However, I still see prices moving higher for the next month or so.
Posted by Unknown at 3:03:00 PM