In the last week I have been looking at some economic data series that go back to at least the 1920s to determine which might serve as leading indicators of deflationary busts. Previously I have looked at BAA corporate bonds and housing starts.

Now let's look at commodity prices. These have been kept since 1913. Some sort of commodity index is thought to be an element of ECRI's growth index. Similarly, frequently you will read Bonddad and others making reference to "Dr. Copper," the idea that the use of that industrial metal is a good guide to the health of the economy overall. 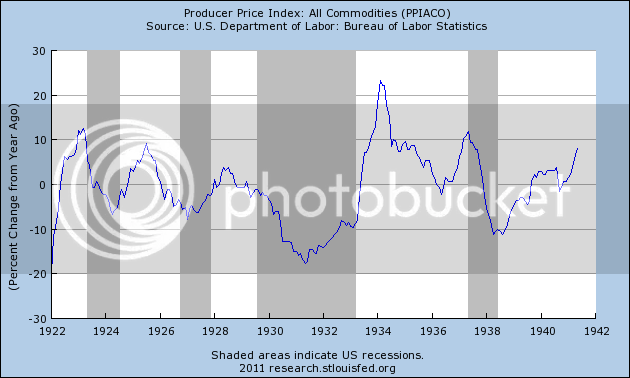 While it's true that YoY commodity prices went negative before the 1927 and Great Depressions, they were coincident indicators for 1923 and 1938. Further, they gave a false signal in 1936.

Here is the same series from 1998 to the present: 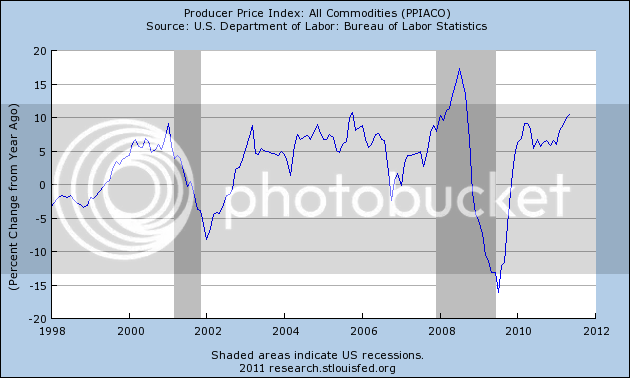 While wholesale commodity prices plunged during recessions, they gave scant notice of the dot-com recession, and continued rising ($147 Oil!) 7 months into the "Great Recession."

I suspect there is a more complex relationship at play. Inflationary recessions are in part caused when commodity prices rise much faster than consumer prices (meaning producers cannot pass on costs and profit margins are squeezed), which explains the 1923 recession (commodity prices rose 10% while consumer prices barely rose at all) and the energy shock portion of the "great recession." To the contrary, commodity weakness in the face of deflation in consumer prices as well may be a signal of an oncoming deflationary bust (1927, 1929, and thereby excluding 1936). If there is a reliable signal, it is more complex than simply a rise or fall in commodity prices.
Posted by New Deal democrat at 1:30:00 PM