Consumer spending, a key driver of economic growth, was flat in May, the Commerce Department said Monday. Incomes rose 0.3%, providing some hope that spending could pick again later in the year.

Economists surveyed by Dow Jones Newswires were expecting spending to rise by 0.1% and income to register a 0.4% gain.

May's weak spending levels give further evidence that the recovery has slowed during the first half of the year, as a rebound in the unemployment rate combined with higher gasoline and food prices have caused consumers to tighten their belts.

Monday's report showed that when adjusted for inflation, spending actually went down 0.1% in May. 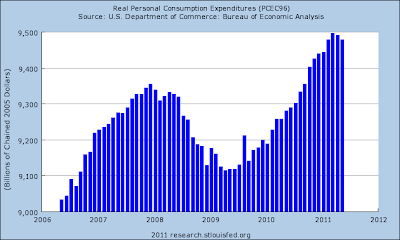 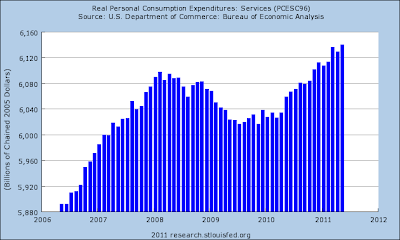 Services -- which comprise 65% of PCEs -- rose law month. Also note the overall trend of these purchases is increasing. 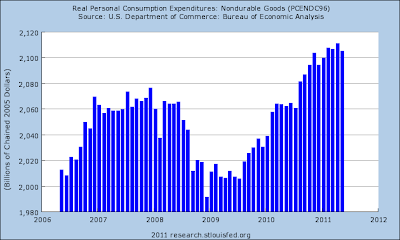 Non-durable goods comprise about 22% if PCEs. Notice this indicator has been more or less flat for the last four months. 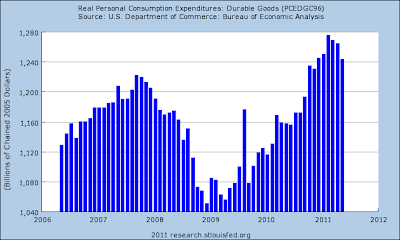 Durable goods expenditures -- although comprising the smallest part of PCEs are by far the worst performing segment, falling the last three months.

The above charts indicate that consumers are feeling a pinch from several places: high gas prices (which are lowering car expenditures and thereby durable goods) and still high unemployment. As a result, they are pulling back on spending. As this accounts for 70% of overall economic growth, this is a bad development.
Posted by Unknown at 11:30:00 AM