The oil market is caught between two different issues. In the short-term, there is concern about the pace of expansion. Lower growth = lower oil demand = lower prices. However, as I pointed out above, there has been a strong, fundamental, long-term shift in the world's oil demand as countries like India and China have grown with their demand supplementing US/EU demand, providing a long-term floor under prices. But currently, these countries are also tying to slow growth due to increased inflationary pressures within their respective countries. In other words, there is currently a great deal of negative sentiment weighing down oil prices.

On the same day, the IEA announced a coordinated effort to release oil from various strategic oil reserves in an effort to lower prices, which in fact happened.

The above analysis still stands: there are short-term issues that are hitting oil prices, but longer term supply and demand are still incredibly tight. Professor Hamilton summed up the basic issue in his article on the release:

In any case, the deed is now done, and the IEA has run an interesting experiment for us in how oil markets function. But I would recommend against further SPR sales, regardless of the final outcome of the current effort. The reason is that I see the long-run challenge of meeting the growing demand from the emerging economies as very daunting, and in my mind is the number one reason we're talking about an oil price above $100/barrel in the first place.

A one-time release from the SPR, or even a series of releases until the SPR runs dry, does nothing whatever to address those basic challenges.

And the growing demand from emerging markets is the primary underlying force in the oil market right now, which I believe is putting a floor under oil prices.

That being said, let's take a look at the chart: 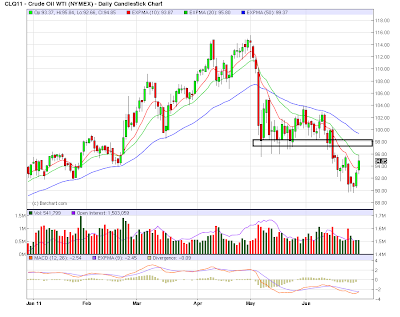 The price chart is still negative. All the EMAs are moving lower and prices have been using the EMAs are technical resistance. Also notice that the EMAs have fanned out, obtaining a bit of distance from each other. The MACD is also weak; it's in negative territory and has shown little advance over the last month. However, it is about to give a buy signal.

My long-term prediction for oil is for prices to again move higher and stay there because of the macro level supply/demand situation (see the link above for the charts). However, right now the chart has to move through a fair amount of technical resistance. Prices have to advance through the EMAs and several resistance levels. I would give prices through July or mid-August to accomplish that feat before moving into higher territory.