Will Home Prices Fall Any Further?

There's been a great debate/discussion in the economic blogsphere between David Altig at Marcoblog, Barry Ritholtz and Calculated Risk about housing prices. The topic is simple: how much farther (if anywhere) do home prices have to fall? First, let me post the various graphs from the previously linked posts to show on what everyone is basing their argument. 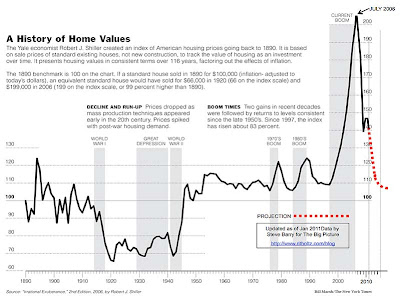 This was followed by a post from another economist named Paul Kasirel, who put up this graph: He explained his analysis thusly:

Barry continued with this point:

Might home sales pick up again in a couple of months? Perhaps, but I doubt it. I simply do not see any compelling reason for the marginal home buyer to make that purchase. By September, we will be fighting seasonal factors. The exception is the key bubble bust regions, where foreclosures are driving prices as much as 50% off the peak prices.

But I am unconvinced about prices in general. My problem with imputed rent is that it is not independent of demand for home purchases; Imputed rents interact with home prices, credit availability, pricing trends, employment, etc.

Indeed, one can easily imagine a scenario where: 1) Home prices are thought of trending lower; 2) Credit is tight; 3) Employment is weak; 4) Wages are flat. This would create an environment of relatively soft demand for home purchases (sending their prices lower) At the same time, this would increase demand for rental units. 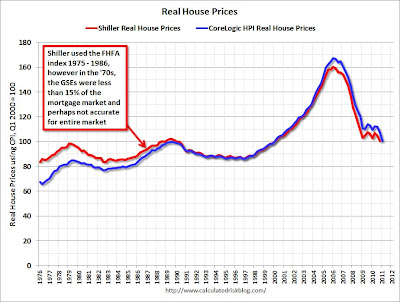 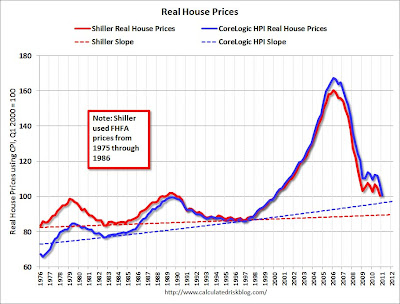 And David Altig added this: 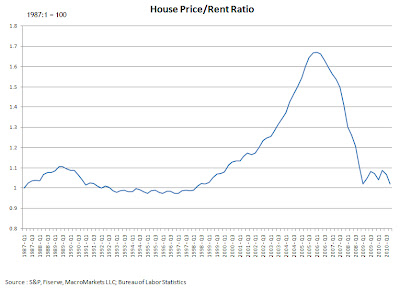 Simply going with the "where is a majority of the data" pointing approach (a remarkably unscientific approach), there is far more data pointing to the idea that the market is near the price bottom. Let me add two more charts: 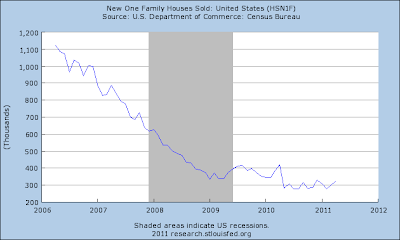 While still very low, new home sales have leveled out for the last two years. 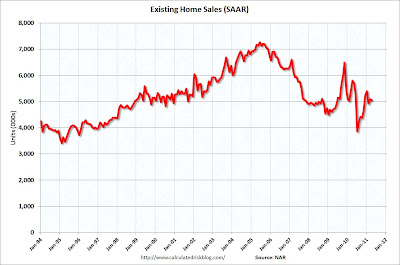 Existing homes sales have a median rate of around a 5 million annual rate (+/- 150,000 or so) -- even when you include the dislocations from the first time home buyer tax credit.

So, we have the following.

1.) A majority of information related to home prices indicates we're pretty close to a bottom

2.) The sales pace for both new and existing homes -- while low for new and while pretty low for existing -- has been at a pretty consistent pace, even when you include the tax credit distortions.

Going forward, I think prices are cheap enough to continue to bring buyers into the market. But, I don't think there will be a big pop in demand because of the overall macro situation. So, I think the current sales pace will continue barring an unforeseen shock and the prices may fall a bit more (say 10%-15%) but that if we're not at the bottom, we're pretty close.