Today, I again want to look at copper, but largely because of an article from yesterday's WSJ:

Dr. Copper is feeling under the weather. But will his ailment prove fatal?

The charts don't look good for the metal widely regarded as having a Ph.D. in economic forecasting. Monday's 3.1% fall in the Comex front-month copper contract, to under $4 a pound, pushed it back below the 200-day moving average, a closely watched support level. Worse, the shorter-term, 50-day moving average has been dropping pretty steadily since late February. The dreaded "death cross" looms, when the short-term average drops below the long-term one, portending sustained weakness.

Any prognosis must rely on more than charts, however. Copper's last death cross, just under a year ago, didn't bury the metal. By September, the 50-day average had moved back above the 200-day indicator, as copper entered a seven month bull run. By mid-February, the copper price had risen 54% and surpassed its 2008 peak at the height of the precrisis commodities boom.

That last run upward, however, coincided with a couple of things. First, the Federal Reserve's second round of quantitative easing, or QE, drove U.S. real interest rates decisively lower. By weakening the dollar and reducing the opportunity cost of holding nonyielding assets, this made metals a relatively attractive investment. Second, Chinese inventories of copper were restocked during the second half of 2010, according to Deutsche Bank estimates.

Copper's overall importance to the economy as a whole makes it a very important commodity -- and one who's price needs to be monitored. 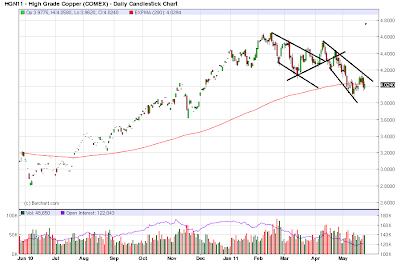 The longer term (1 year) chart shows several pieces of important information. First, prices are right at the 200 day EMA. Secondly, prices have formed a down up down pattern that shows a fairly disciplined sell-off. This indicates there is no panic selling going on. 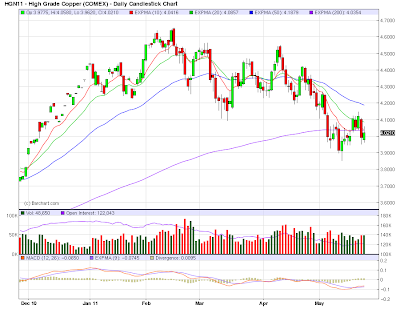 The shorter chart shows that all the shorter EMAs are all moving lower with the shorter below the longer. Prices are also right around the 200 day EMA, indicating there is a question about whether the market is going to move into bearish territory or remain bullish. Although the MACd has given a buy signal, it is still giving an overall weak reading, indicating there is little strong upward momentum right now.

Overall, this is a fairly weak chart, but it also shows a pretty disciplined sell-off, indicating the liquidation is pretty orderly. This looks very much like a "wait and see if the economy slows considerably" move.