Which is for the Fed to consider using the cost of labor as the preferred measure to determine Fed interest rate action.

This paper assumes that a central bank commits itself to maintaining an inflation target and then asks what measure of the inflation rate the central bank should use if it wants to maximize economic stability. The paper first formalizes this problem and examines its microeconomic foundations. It then shows how the weight of a sector in the stability price index depends on the sector’s characteristics, including size, cyclical sensitivity, sluggishness of price adjustment, and magnitude of sectoral shocks. When a numerical illustration of the problem is calibrated to U.S. data, one tentative conclusion is that a central bank that wants to achieve maximum stability of economic activity should use a price index that gives substantial weight to the level of nominal wages.

He also includes this chart: 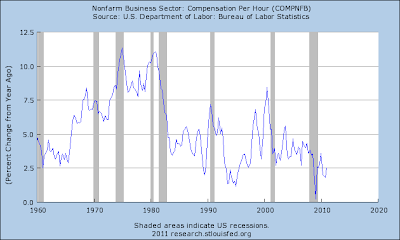 I think it's an interesting idea.

The primary argument against this idea is it will penalize people for getting pay increases. However, remember that pay increases occur at the macro level for two reason: very low unemployment, which gives the job seeker more bargaining power when seeking a job, and high inflation, which forces people to ask for a raise to pay for the cost of living increases. In either case, there is obvious inflationary pressure in the economy that may require Fed action.
Posted by Unknown at 8:30:00 AM