The Disappointment Syndrome Redux (Or: if I don't toot my own horn, who will?)

One month ago I described the disappointment syndrome, writing that

... with no more than three exceptions, every initial report on nonfarm payrolls in 2010 has been "disappointing." Two months later, after upward revisions, they have usually been in line with initial expectations. But by that time the econo-punditocracy has moved on to disappointment with the newly-current initial nonfarm payrolls report.

Specifically, two months ago, expectations of private payrolls on the order of 90,000 or even better were raised by good ADP and TrimTabs estimates. Yet the initial report was a "devastating" 39,000. I said then that the November jobs report will probably be revised considerably higher:

Take a deep breath. .... The odds are very good that [the November jobs report] will be revised significantly higher in the next two months. .... The median final revision of the Jan-Sep initial reports has been +53,000. All but two of the nine that have been finally revised have increased by at least +46,000. A revision of +53,000 to November would give us +92,000.

So, here we are two months later, with the final revisions for November in. And the final number is .... [insert drum roll here] :
92,000.
It's true that even a blind squirrel finds a nut every now and then, but I happen to think it means that you are reading the right blog. More to the point, how much commentary was there Friday pointing out that November's jobs report turned out not to be "disappointing" at all? None.

In a similar vein, in December, most estimates were for 150,000 or more jobs to be added. Instead, there was a "disappointing" 103,000 initial report. Note that after the first revision, close to half of that ground has been made up.
In fact, leaving aside the yearly revisions for now, every single initial report in 2010 except one was revised higher. Here are the initial and final monthly jobs numbers (in thousands) excluding census, showing total revisions, for all of 2010:

Even after the reductions due to the annual benchmarking, 9 of the 12 months still had upward revisions compared with the initial estimate, with the median revision being +27.
There is thus every reason to believe that January's "disappointing" +36,000 job report will be less disappointing in two months' time, and given that the BLS's establishment survey tends to undercount jobs early in recoveries, we should expect the pattern to continue.
In that regard, here is the scatter graph of the monthly average of initial jobless claims compared with payrolls (using private jobs to avoid census distortions), updated by the benchmark revisions: 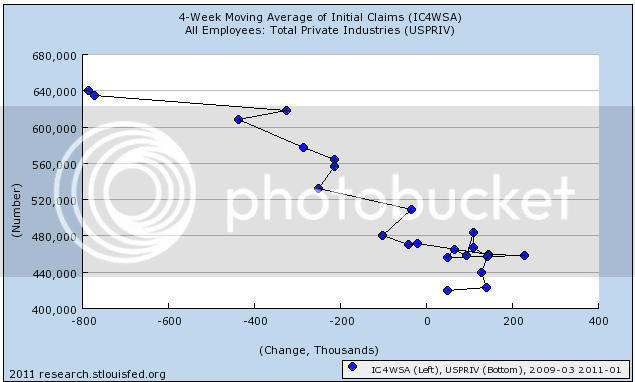 Note Friday's "disappointing" figure, and also that November and December, after revisions, are no longer "disappointing" at all but instead are firmly in mid-trend.
Finally, with regard to the benchmark revisions, here is a graph from Tim Iacono: 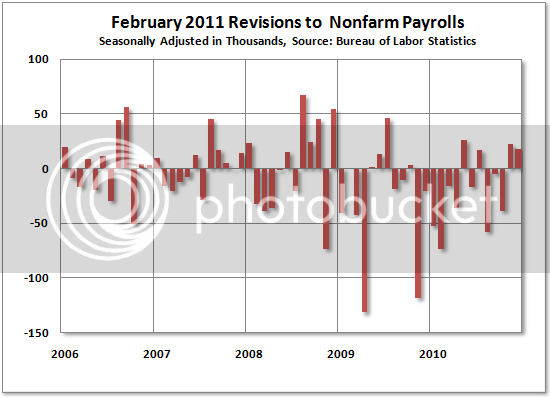 Note that the benchmark revisions reached back 5 years, in some cases making revisions greater than 50,000 in either direction well before the "official" benchmarked period began in March 2009. Despite that, the overall pattern is completely intact. Thus, so long as we don't get too caught up in any one month's figure, we can expect that the trend we believed we had before Friday will still prove to have been the trend in 3 months, a year, and several years' time.
Here is that trend, averaging jobs by quarter:

The jobs recovery is proving to be a long, slow, hard slog, but we are still improving.
Posted by New Deal democrat at 11:00:00 AM