The US economy is currently experiencing its third jobless recovery, or more accurately, recovery where the drop in the unemployment rate lagged the end of the recession by over a year. This phenomena started with recovery of the early 1990s, and continues with the current recovery. What I want to do is look at the employment data from the three recoveries to see what information we can glean.

Before I go forward, let me state this: I will be using relative levels to look for patterns -- that is, all data will be compared from the same level. I understand -- and am fully cognizant -- that the current situation is worse than the previous two recoveries. However, by putting the information into relative terms, we can compare the data to see what is different this time around which is the entire point of this exercise.

First, for a comparison of the unemployment rates and initial unemployment claims in absolute levels for the last 40 years, see this link. 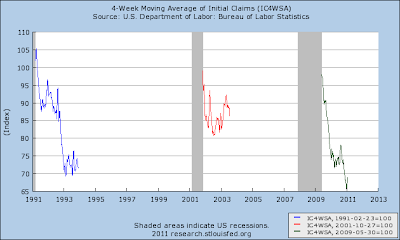 The above chart shows the performance of the 4-week average of initial jobless claims for the first 20 months of the recovery. I have "normalized" the performance to better compare. Interestingly enough, the 4-week moving average has performed better (it has dropped the farthest) during this recovery. This is good news, largely because the number is in fact much higher.

Let's turn to the unemployment rate: 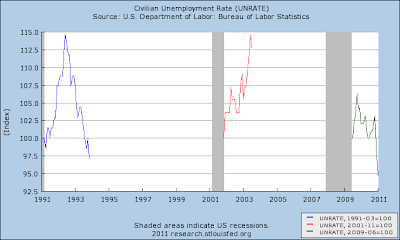 Let me reiterate: I am well aware the numbers for this recovery are far worse for both the above numbers. That is not the point of the above charts. Instead, I want to compare the performance of both numbers to previous jobless recoveries to see if we are witnessing something different this time around. Despite the high absolute numbers, we are seeing the best performance on a comparative basis in both initial unemployment claims and the unemployment rate when compared to the last two recoveries.
Posted by Unknown at 8:30:00 AM