The Employment Report and the Disappointment Syndrome

On Friday I noted the near-universal use of the word "disappointing" to describe the December jobs report. In fact, with no more than three exceptions, every initial report on nonfarm payrolls in 2010 has been "disappointing." Two months later, after upward revisions, they have usually been in line with initial expectations. But by that time the econo-punditocracy has moved on to disappointment with the newly-current initial nonfarm payrolls report.

What happened with November's jobs report is typical. Expectations were raised by good ADP and TrimTabs estimates - Private payrolls on the order of 90,000 or even higher were expected. Yet the initial report was a "devastating" 39,000. The following Monday, after painstakingly picking apart the report, I wrote that it was likely to be revised considerably higher, and that in particular the retail hiring portion of the report was probably an outlier that would get raised.

Let's start with the monthly jobs numbers (in thousands), excluding census, for all of 2010:


Every single 2010 jobs number was positive.

Next, here is the change between initial and final jobs report for each month of 2010, with the net change (including census jobs, which have no impact on the result):

Every single initial jobs report in 2010 except one has been revised higher. The median final revision of the Jan-Oct initial reports has been +49,500.

Turning now to the issue of how big (or not) a role revisions to the "retail trade" number was in the overall 2010 revisions, and in particular November, here are the initial vs. final revised number for that item from the BLS's Schedule B to the December report:


The median change for the "retail trade" series in the Jan-Oct 2010 revisions was +6.0 thousand, meaning that the November initial report did indeed have a substantial miss on retail positions in its initial estimate.

As I also pointed out last month, adjusting for seasonal retail hiring was the problem. Retailers hire a lot of temporary help for the holiday season. It is a known factor and so is automatically seasonally adjusted. In November, the BLS "expected" employers to hire +328,900 retail employees, but in the initial report they were estimated to have hired +300,800, so the inital Seasonally Adjusted number was -28,100. With December's revision, the second estimate is that +317,600 retail workers were hired in November. This is over half of the shortfall, and October's number was also revised higher.

Nevertheless, since - incongruously, given the otherwise solid data for the month - November is still the "gloomiest" absolute retail hiring number of the year - so don't be surprised at further revisions. 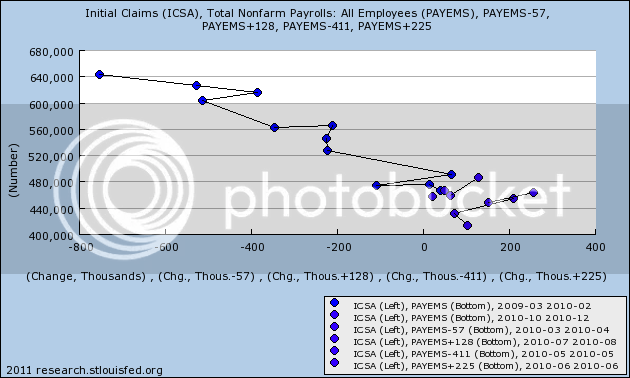 With the latest revisions, November, although closer to the lower end of the trend, is no longer an outlier. Even the initial December report is well within the variance of the trend. 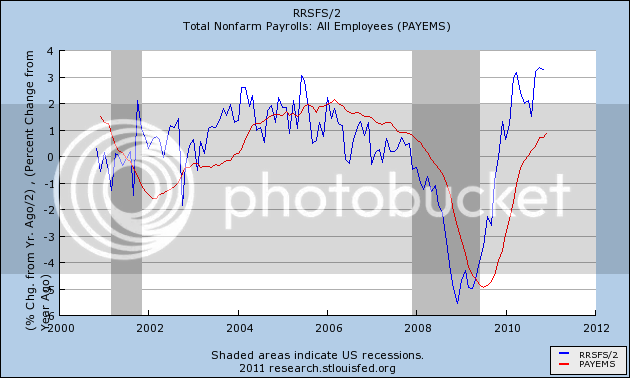 This is still low for this graph, but is moving in the right direction. One likely reason for the temporary divergence is the huge loss of hours worked during the recession. Hours are still being added at a rate faster than jobs, as shown in this graph where December 2007 is normed to 100%: 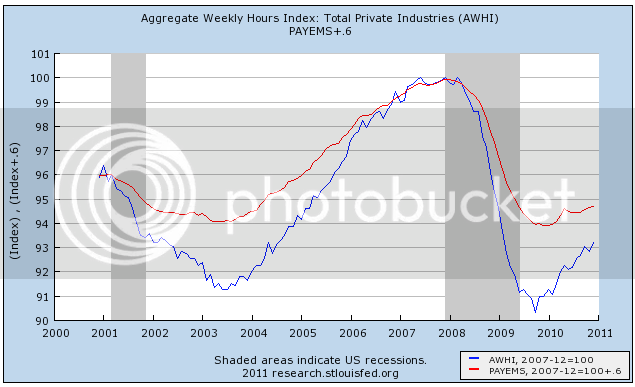 Now here is GDP vs. jobs. Typically it takes about 2% YoY GDP growth to correlate with jobs growth, so in this graph 2% is subtracted from the YoY GDP number: 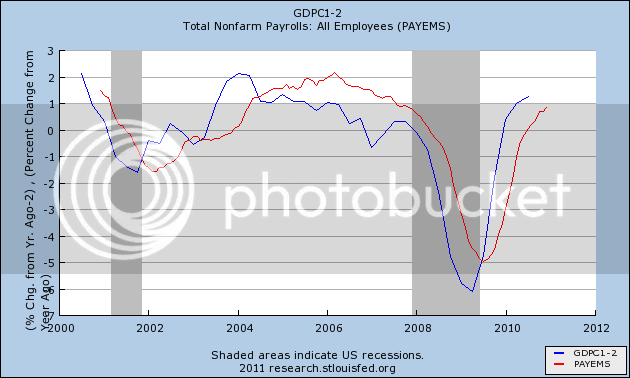 This correlation is holding up quite well.

One final caveat: Next month the BLS will be publishing its annual revisions, covering March 2009 through March 2010. We already know that the average payrolls number for that 12 months period will be revised downward nearly 30,000. What we don't know is what will happen with the positive reports that began in November 2009. For example, last year, despite over 800,000 jobs being subtracted from the prior year's numbers, November 2009's number was actually revised upward.

So, whether these numbers will look better or worse is impossible to say. But they will look different!
Posted by New Deal democrat at 8:30:00 AM