2011: Self sustaining recovery vs. Political idiocy (and Oil)

I'm dividing up my 2011 forecast into two parts: I. The K.I.S.S. method Forecast, and II. The substantive background. This post is part I.

If I were a Wall Street pundit, my career plan would be summarized as follows:

1. study latest readings of the Leading Economic Indicators
2. without ever once mentioning them, write convoluted and graph-heavy forecasts that just so happen to justify coming to the exact same conclusion as what the LEI suggest
3. cash multi-bazillion dollar paychecks and bonuses.

You see, even though the LEI are the statistic most denigrated by Wall Street forecasters, they have the inconvenient habit of being right more often than the highly-paid punditocracy, especially at turning points.

The above led me to a pretty good forecast for 2010, with the exception that the ending of the $8000 housing stimulus, and the Euro currency crisis helped accelerate a brief deflationary episode at midyear. Thus this year's forecast will include looking at those items - and the political landscape in particular does affect the forecast.

The LEI give us a good look at the next 3 months, and some help up to 6 months. After period of flatness at midyear 2010, from September on the LEI have been positive. December's LEI looks almost certain to also print positive, given initial claims declines, stock market growth, a strongly positive yield curve, a modest increase in real money supply, and improved customer sentiment, and flat manufacturing hours. The decrease in ISM vendor deliveries will subtract from this, but unless there are disasters in factory orders, durable goods, and housing permits - very unlikely - December will be positive.

Here is the Conference Board's graph showing the recent re-acceleration of the LEI: 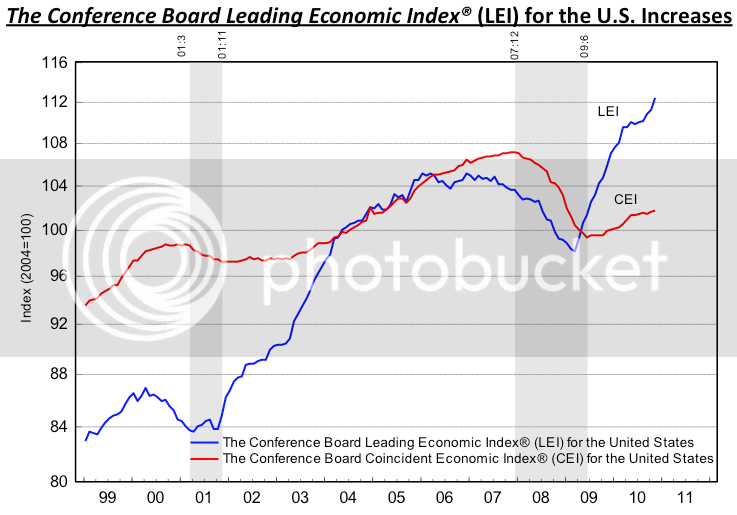 Given the backdrop of consumer spending fueled by the recent increase in the real personal savings rate, Q1 2011 looks like a good bet for above trend economic growth. So would the second quarter, except ...

2. The second and third quarters - beware political idiocy (and Oil)

While it is a near 100% certainty that Congress will not pass any economic stimulus packages, the real problem is whether they can simply leave the recovery alone. This crew gives every sign that they will not.
At some point in March or April, a debt ceiling increase will have to be passed. This Congress gives every indication of preparing for first class brinksmanship and idiocy on that score - meaning that either a government shutdown and/or default will actually occur, or dimwitted austerity measures will pass. So much for the second quarter.
A second episode of idiocy will occur in June when the last of fiscal aid to the states ends. I see zero chance for any extension, and thus renewed budget cuts and layoffs visited by the "50 little Hoovers." So much for the third quarter.

Against this is the backdrop of $90 Oil, which we once again saw in December. I should point out that the inflection point - Oil at 4% of GDP - given general inflation and GDP growth, is probably now more like $94 a barrel. But continuing expansion in Q1 should push us there. As with 2010, the effect of the price of Oil depends on how far and for how long it overshoots that mark. At this point I do not anticipate much of an overshoot, but combined with Congressional idiocy, this should be enough to restart fears of a double-dip in the April-July window, as a brief deflationary spurt again appears as Oil kills some demand are retreats in price.

Last year I also highlighted 5 other harbingers of the midsummer stall in the economy. Several of those are flashing yellow at this point, but not red. Those are:

the Shanghai stock index, which hit a year high in October and has fallen 10% since then: 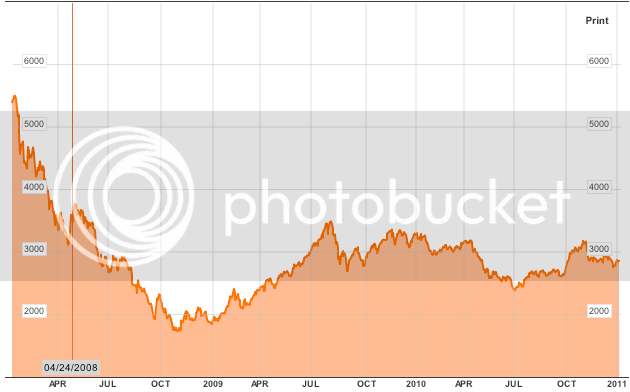 and the fact that stocks and bond yields are once again moving in the same direction, although as mirror images of one another (much as they did in the 2003-07 expansion, but unlike the 1982-2000 secular bull market) is at least a cautionary signal: 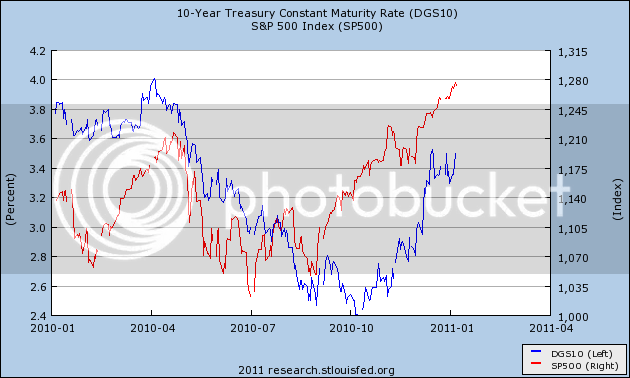 LIBOR has also increased slightly, but not significantly as of this writing.

All in all, there is an excellent chance for deceleration, although probably not outright decline, in the second quarter and over the summer.

3. The fourth quarter - the yield curve reasserts itself

Congressional idiocy probably will not recur after midyear until the end of 2011. The decleration discussed above should cause Oil once again to back off. Under these circumstances, with deflation off the table or over with, the yield curve, which has been relentlessly and increasingly positive, as seen in this graph: 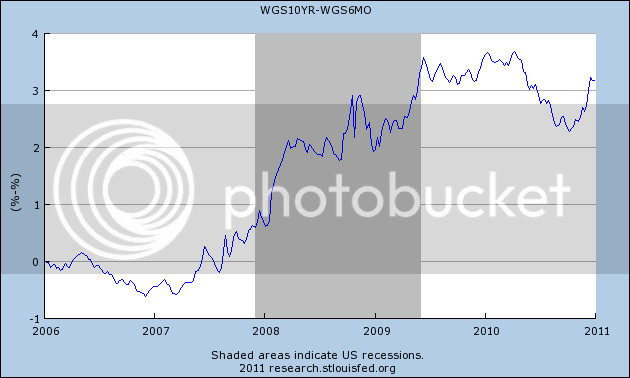 will likely reassert itself. As I do not see the Fed becoming senile and decreasing real money supply, this should signal re-accelerating growth from about Labor Day until year's end.
In short, the K.I.S.S. method suggests continued economic growth all year, but Oil will once again serve as a choke collar on that growth. As the price of Oil briefly declines, there may be a brief deflationary episode, but like last year this will not be enough to overcome the signal of the steeply positive yield curve. The real joker in the deck is the issue of whether political idiocy will deliver several negative jolts. If that happens, it seems most likely to be in the March-July window.
Whether our good fortune in escaping more than a brief episode of slight deflation is likely to continue is the subject of Part 2.
Posted by New Deal democrat at 8:30:00 AM