A Closer Look at Smaller Banks; Banks Under $100 million

Let's start the new year with a look at smaller financial institutions. The Federal Reserve's St. Louis Branch breaks these down into banks under $100 million, banks between $100 - $300 million and total banks under $300 million. 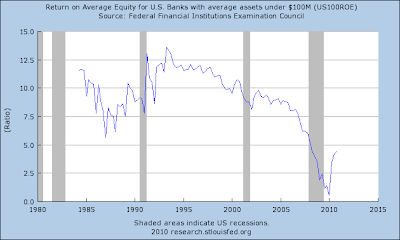 The average return on equity is still low, but it has moved higher over the last bit of time, as has 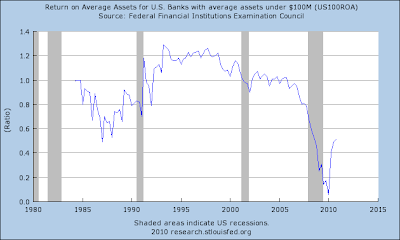 the average return on assets. In addition, 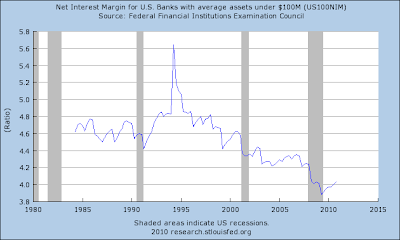 the net interest margin is near 20 year lows.

The above three charts indicate that earnings power is currently low. 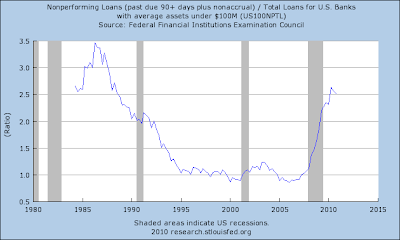 First, note the total non-performing loans as a percentage of all loans is high, but was actually higher in the middle of the S and L crisis. 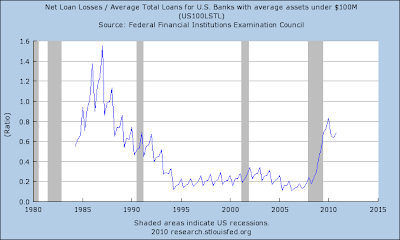 Also note that net loan losses as a percentage of average assets is also lower than the heights reached in the S and L crisis. 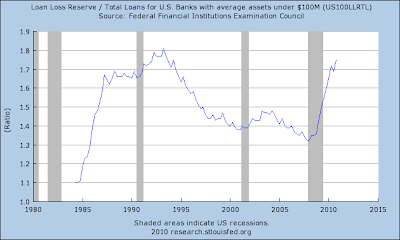 Finally for the under $100 million banks, the total loan loss reserve is increasing and nearing the post S and L crisis level, but isn't at highest point yet (although it could reach that level pretty easily).

The smaller banks have headwinds going forward. First, their net interest margin, return on assets and return on equity are all low, indicating that earnings power is weak. In addition, total non-performing loans are high, although not as high as levels attained in the S&L crisis, nor are total losses as a percentage of average total loans near 20 year highs. But these banks are also having to set aside some of the largest loan loss reserves of the last 20 years. All of these factors add up to a stressed area of the banking industry.
Posted by Unknown at 11:30:00 AM