Let's move onto the service component of the Beige Book:

Activity was said to be steady to increasing among Districts reporting on nonfinancial services. Providers of information technology services saw increases in sales in the Kansas City and San Francisco Districts. Advertising and consulting contacts in the Boston District reported significant growth in demand. In the Dallas District, legal firms noted an uptick in demand for services, while accounting firms reported seasonal slowness. Reports from the healthcare sector were mixed; St. Louis and Minneapolis reported ongoing increases in demand for healthcare workers, while San Francisco indicated a slight weakening in demand for healthcare services and Richmond reported little change. Demand for staffing services remained on an upward trend, with increases reported by New York, Philadelphia, Richmond, and Chicago. In addition, an employment-agency contact in the New York District observed increased demand for employees in the legal and financial services sectors, while the Dallas District noted strong, steady demand for workers in the professional, technical, healthcare, and finance fields. Reports from the transportation services sector were mixed, with increased demand reported by trucking firms and airports in the Richmond District, and slower overall activity in the Kansas City District. Freight companies in the Cleveland District noted stable volumes over the past six weeks, and contacts in the Atlanta District reported moderating freight volumes after significant increases in earlier 2010 reporting periods.

Boston: Advertising and consulting contacts in the First District report significant growth in demand during the fourth quarter of 2010, with increases in revenue ranging from 5 percent to 30 percent. Most contacts attribute the rise to pent-up demand across many sectors and industries, as clients have been restrained by economic conditions since 2008. Responding firms held their prices steady or increased them slightly in the fourth quarter; some are planning to raise prices about 5 percent in 2011. Changes in business costs vary, with some firms citing stable wages, some raising compensation, and one firm cutting costs by hiring lower wage-rate replacements for selected employees. All contacts plan to increase employment next year to meet recent and expected increases in demand, with net hiring of 5 percent to 20 percent. Some of them expect salaries to stay stable through 2011, while some expect modest increases.

Most contacts are highly optimistic about their near-term performance and throughout 2011, mostly based on the increased volume of deals already secured and growing inquiries from clients. Expectations about general economic recovery in 2011 contribute to these projections as well. They expect annual growth in revenue ranging from 5 percent to 15 percent.

NY: A major New York City employment agency that specializes in office jobs, reports that business was relatively good in December--typically a slow time of year. Legal sector hiring has rebounded a bit from exceptionally weak levels, while financial sector hiring has continued to improve gradually. Fewer job seekers are coming in than a few months ago. More generally, non-manufacturing firms report that they are adding jobs, on balance, and many plan to increase staffing levels in the first half of 2011. Manufacturing contacts, however, indicate some recent tapering off in employment levels, based on our December survey. Nevertheless, contacts in both manufacturing and other sectors generally indicate that business picked up in December and express widespread optimism about the outlook for the first half of 2011. Contacts also report widening cost pressures but only a modest pickup in their selling prices.

Philadelphia: Service-sector firms generally reported slightly rising activity since the previous Beige Book. Contacts said that the health care sector continued to have relatively better gains than other sectors and that service-sector activity related to construction continued to be weak. The outlook for the services sector as a whole is modestly positive. One contact said, "We see some slight improvement in the near term, but it will be well into 2011 before there is stronger growth."

Minneapolis: Professional business services firms reported increased activity. A contact that supports business travel services noted an unexpected increase in activity since the last report. A large technology company is increasing the number of its contract programmers to support software upgrades. An architectural firm noted an increase in projects up for bid as well as a greater number of bidders. Firms that support the mortgage refinance market noted a sharp decline in activity due to higher long-term interest rates.

Dallas: Staffing firms reported demand held steady at high levels. Strength remains broad-based, with particularly strong demand for workers with expertise in the professional, technical, healthcare and finance fields. Contacts noted that call centers were becoming a new source of strength. As in the last report, contacts said direct-hire activity was picking up. All contacts had positive outlooks and expect continued strength in 2011.

Accounting firms noted seasonal slowness, with demand about even with the year-ago level. Contacts expect a reasonably good year in 2011 but noted demand is unlikely to pick up substantially until clarity is reached on some public and fiscal policy issues. Legal contacts noted an uptick in demand for services--primarily corporate merger and acquisitions and real-estate services. Demand overall was characterized as soft, but improving.

Reports from transportation services contacts were mixed, but mostly positive. Railroad contacts noted business is much better than this time last year and were optimistic in their outlooks. Shipping and intermodal contacts said volumes were up from year-ago levels. Airlines reported continued steady demand. Most contacts in the transportation services industry expect modest to moderate growth this year. However, one intermodal shipping contact said higher input costs had dampened his outlook.

Frisco: Demand increased further for business and consumer services on balance. Sales continued to expand for providers of technology services, including biomedical products, but they remained largely flat for providers of professional and media services. Restaurants and other food-service providers noted further modest improvements in demand, and suppliers of energy services reported increased deliveries to end-use customers. By contrast, providers of health-care services reported that demand weakened slightly in recent months. Conditions continued to improve for businesses in the travel and tourism industry. Contacts from several major markets in the District noted increases in visitor volumes and hotel occupancies, which resulted from rising business travel as well as tourism.

Let's take a look at some of the macro-level data: 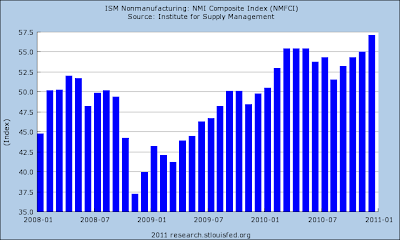 The ISM non-manufacturing composite index is at its highest level in two years. 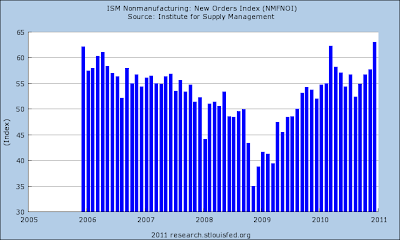 The new orders index jumped to its highest level in five years in the latest report. 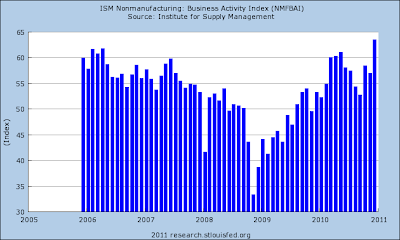 Also note the business activity index is also at its highest level in five years.
Posted by Unknown at 8:30:00 AM