Household Debt and the Bankster-friendly Recovery

Economist's View reprinted a great article by the San Francisco Fed this morning, entitled Household Debt and the Weak US Recovery arguing that:

"problems related to household balance sheets and house prices are the primary culprits of the weak economic recovery."
....
Overall, the county evidence strongly suggests that credit demand is weak because of an overleveraged household sector. This view is supported by survey evidence that the main worry of businesses is sales, not financing. .... Weak consumer demand also helps explain the enormous cash balances currently held by U.S. corporations (see Lahart 2010). These results have important policy implications. If the main problems facing businesses relate to depressed consumer demand due to a household sector weighed down by debt, investment tax subsidies and lower interest rates may have a limited effect on business investment and employment growth.

Included is this great graph showing the debt-to asset and debt-to-income ratios of US households: 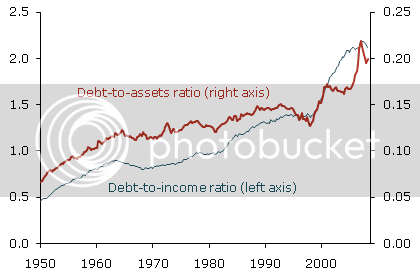 Notice that by this metric, relatively little has been done to discharge the huge run-up in debt amassed by US consumers during the Bush expansion of the first part of the last decade.

On the contrary, here again is the graph for debt payments as a percent of disposable income, as of the third quarter of 2010: 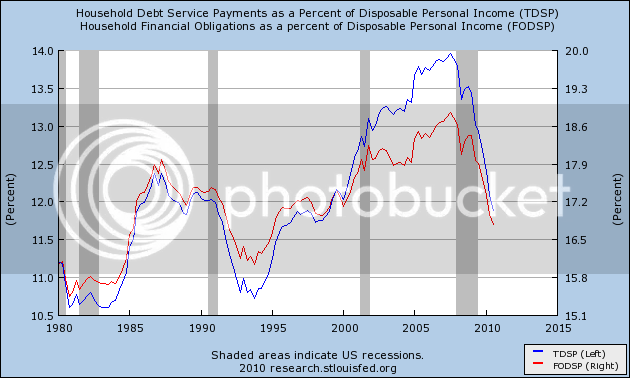 As I've noted before, the difference in the two graphs is the effect of refinancing existing debt at lower interest rates. I'm not sure how much longer the trick of refinancing can be used - unless mortgage rates are going to decline further to 3% or 2% like the Great Depression.

Which brings me to the final, depressing, point. On the one hand, the Panics of the 19th century ultimately did resolve themselves, however slowly, without "New Deals." So will this bust. On the other hand, it is a measure of how completely intellectually captured are the political elites in Versaille that while the banksters have been made whole, in the face of the worst downturn since the Great Depression, the only direct aid to consumers/households has been modest tax decreases, and the only aid directly for the unemployed has been the extension of unemployment benefits for some, but not all, long term jobless to a maximum of 99 weeks. The rest, as Atrios says, have been "rimshots" such as aid directed to the states for construction projects.

Meanwhile, the single most effective remedy for overextended household balance sheets - "cramdown" authority for bankruptcy judges to write down mortgages on primary residential properties - was tabled by a Congress with the biggest democratic majorities in decades, with the acquiescence of a democratic Administration. Three years ago we could debate the moral hazard and rectitude of such cramdown legislation. The San Franciso Fed's report shows just how huge a price the economy as a whole, and consumers in general, are paying for that choice.
Posted by New Deal democrat at 11:30:00 AM