Will Oil Prices Derail the Recovery?

From This Week in Petroleum

In late December, the average national retail price of regular grade gasoline rose above $3 per gallon for the first time since October 2008. However, when gasoline sold for $3 per gallon in October 2008, gasoline prices were in the midst of a sharp decline that saw prices fall from a peak of $4.11 per gallon in July 2008 before bottoming-out at $1.61 per gallon in December 2008. Since then, prices have been on an upward trend.

Crude oil prices have risen to over $90 per barrel fueled by world petroleum demand growth, particularly in non-Organization for Economic Cooperation and Development Asian countries such as China and India, and other factors. As highlighted in the Energy Information Administration's (EIA) most recent Short Term Energy Outlook (STEO) and last week’s This Week In Petroleum, EIA expects continuing tightening of world oil markets over the next two years, keeping upward pressure on crude oil prices.

Also consider the following graph from the same report: 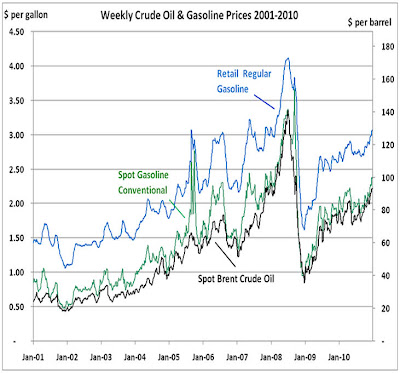 The price of gas is a key price that consumers see everyday. Escalation beyond psychologically important levels (like $3.00/gallon) gives consumers cues regarding the economy. Remember that the spike to over $4.00/gallon occurred before the last recession.
Posted by Unknown at 8:30:00 AM