Nonfarm private employment increased 32,000 from March to April 2010 on a seasonally adjusted basis, according to the ADP National Employment Report®. The estimated change in employment from February to March 2010 was revised up, from a decline of 23,000 to an increase of 19,000.

In addition, the revised estimate of the monthly change in employment from January to February 2010 shows a modest increase of 3,000. Thus, employment has increased for three straight months, albeit only modestly. The slow pace of improvement from February through April is consistent with the pause in the decline of initial unemployment claims that occurred during the winter months. 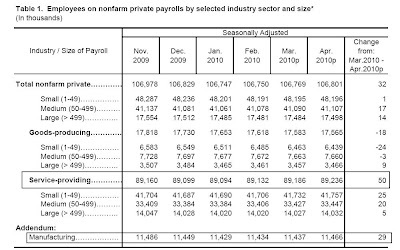 Click on the above images for a larger image.

1.) All the recent revisions have been upward. That implies that the estimating model used is still too bearish for the underlying economy.

2.) There has been modest growth in manufacturing jobs. The strong manufacturing numbers we've been seeing for some time are starting to translate into job growth.

3.) The primary drag has been in construction jobs. Don't expect this trend to change anytime soon. In addition, consider the post on unemployment and educational achievement for more insight into the issue.
Posted by Unknown at 3:30:00 PM